As we've mentioned before, one of the strengths of the 2013 MLB draft class is college pitching, particularly left-handed college pitching. Sean Manaea of Indiana State, Kevin Ziomek of Vanderbilt, Tom Windle of Minnesota, Dillon Overton of Oklahoma, and Kent Emanuel of North Carolina all look like potential first round picks. Another southpaw arm to watch carefully is Gonzaga's Marco Gonzales, seen as the second-best of the group (behind Manaea) by many experts. Let's take a look.

Marco Gonzales played high school ball in Fort Collins, Colorado. He was a two-way guy, thriving as both a pitcher and an outfielder/first baseman. The home-state Colorado Rockies drafted him in the 29th round in 2010, but he chose to attend college at Gonzaga to get an education and (hopefully) boost his draft stock.

He made the right decision. Gonzales was excellent as a freshman, going 11-2 in 15 starts with a 2.57 ERA and a 90/21 K/BB in 105 innings, allowing just 83 hits. He showed some contact hitting skills as well, batting .291/.403/.382 with 17 walks and 19 strikeouts in 110 at-bats, playing as a first baseman and left fielder. He was named West Coast Conference Co-Player of the Year, quite an honor for a freshman. He followed up with a strong summer for the Saskatoon Yellow Jackets in college summer ball.

Gonzales isn't a huge guy, standing at 6-1, 185. He's a good athlete and a solid-enough hitter, renowned for an efficient swing and a good glove, but he doesn't have enough power to stand out at first base or the outfield, and his future is definitely on the mound. His fastball is average in terms of velocity at 88-92 MPH, but his command of the heater is excellent. He also has a superior changeup, possibly the best in the college ranks. His curveball and slider aren't as good as the changeup, but they are workable, and the entire arsenal plays up due to his command and clean, consistent delivery.

Although Gonzales doesn't have Sean Manaea's upside, his combination of pitchability, polish, and reasonable stuff compares favorably to the other college lefties in the draft class. His statistical performance is obviously outstanding, and most scouts feel that he will zip through the low minors.

Assuming that nothing goes wrong this spring, Gonzales should fit well in the middle or later half of the first round. 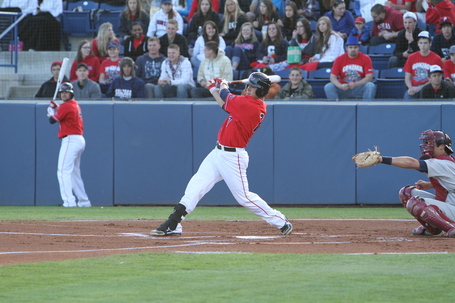