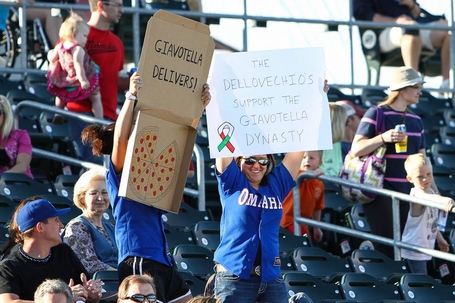 The Storm Chasers committed four errors against Tucson on Monday night, but they also hit four home runs, which was enough to win the game 11-8.

The 17-game hitting streak that David Lough had earlier this season will be wiped off the books. How can he lose a hitting streak if he's playing for Kansas City? Here's the deal ... the Storm Chasers started a game in New Orleans on May 1 that was suspended due to weather. Lough did not have a hit in the game, but his streak remained intact until the suspended game was resumed. That game will resume today in New Orleans. So, Lough's 17-game streak never existed, at least in the record books.

Anthony Seratelli has some fans on the first base side of Werner Park who usually sport a sign staking a claim to that part of the stadium, calling it Telli-town.

Johnny Giavotella has recommended a home run call for the radio broadcast booth. He wants to be called "Johnny Paycheck." He offered an alternative as well: "G-money."

Speaking of Giavotella, a fan named Rachel Dellovechio sent Johnny a tweet before the home game on Thursday saying she was coming out to the Storm Chasers game for her birthday. Giavotella made her night when we gave her a bat. She tweeted this photo:

@gio2bkc Thank you for the bat! I had the best birthday ever thanks to you. And thanks for the win! #ItalianStallion twitter.com/DegoDiva/statu…

Royals roving hitting instructor Terry Bradshaw was at Werner Park this week for the four-game Tucson series. He worked with a number of guys in the batting cages.

Branch Rickey, PCL president and grandson of the Branch Rickey, visited Werner Park on Tuesday. He took in some of the game from the concourse behind home plate. I talked to him about the movie "42" and about how Harrison Ford portrayed his grandfather. Stay tuned for that article in the coming days.

Did you know that many of the PCL teams in the West and Southwest are using humidors this season in an attempt to minimize the altitude?