Padres Prospects Erlin and Boxberger Working Through a Rough Patch

Share All sharing options for: Padres Prospects Erlin and Boxberger Working Through a Rough Patch

Over the past few days, I had a chance to watch the two highest rated active Triple-A prospects in the San Diego Padres system. Lefty starting pitcher Robbie Erlin is ranked No. 8 in the organization according to MLB.com and right-hander Brad Boxberger is ranked No. 17. 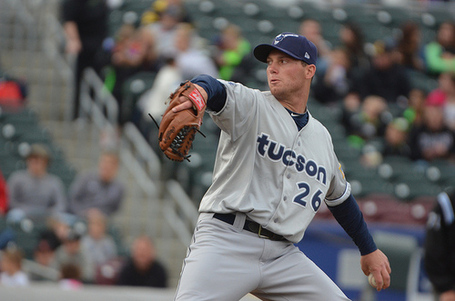 The book on Erlin is that he goes after hitters and he commands the strike zone. He didn’t do either one particularly well in his start against the Triple-A Omaha Storm Chasers last night. Instead he gave up five runs on five hits (including a home run) and two walks in just 4 2/3 innings (94 pitches).

It was the second time in a row that Erlin has been hit hard. He gave up four earned runs in Iowa in 4 2/3 innings on May 17. But Tucson Padres radio broadcaster Tim Hagerty isn’t reading much into Erlin’s recent struggles.

"It happens," he told me. "He’s only 22 years old, which is really young for this league. If you look at guys his age, generally they are in Double-A and in some cases even lower if they are a college player.

San Diego called up Erlin in April and he saw limited action (he threw two innings and gave up two earned runs) before being optioned back to Tucson.

Erlin throws an 88-90 mph fastball (that occasionally touches 92), a curve ball and a change-up. He will also throw the occasional cutter and slider. As a finesse pitcher, he relies completely on his command. It was clear early on last night that he didn't have it.

He got ahead of leadoff hitter Irving Falu, 0-2, and then hung a curve ball that Falu whacked into centerfield for a single. After giving up an infield single, Erlin walked Johnny Giavotella on five pitches. Later in the inning, Omaha drove in two runs on sacrifice flies.

His command issues continued in the second inning. He walked Anthony Seratelli on four pitches to begin the inning. Seratelli stole second. And two hitters later, Brett Hayes worked the count full before Erlin threw him an offspeed pitch that caught a lot of the plate. Hayes singled in Seratelli to give Omaha a 3-1 lead.

Erlin settled down in the third inning, working ahead in the count against Giavotella and Ramirez before retiring them. It was his only 1-2-3 inning of the evening.

But just when he seemed to be getting on track, he gave up a long home run to Nady on a 2-2, 90 mph fastball to lead off the fourth inning. He got the next three hitters he faced, but his pitch count was up to 72 by then.

To start the fifth inning, he left a 2-2 fastball up and Willy Taveras singled. Erlin got the next two hitters, but with his pitch count nearing 100, Tucson manager Pat Murphy removed him from the game.

Erlin throws a lot of pitches, but for a guy with a 6.57-to-1 K/BB ratio over his five-year minor league career, that’s not a surprise.

Boxberger tossed two innings of relief on Monday night in Omaha, giving up four earned runs, including home runs to Christian Colon and Taveras. After posting decent numbers in April, he has a 15.75 ERA in May.

Hagerty doesn’t think Boxberger’s inflated numbers this season are cause for concern though. He pointed to what Boxberger did in the big leagues last season. In 24 relief appearances for San Diego, he posted an impressive 2.60 ERA.

"He probably went into spring training thinking he was going to be in the major leagues," Hagerty said. "He fared well last year. He’s on the 40-man roster. It didn’t shake out. But the reputation of Triple-A players being unhappy, negative, feeling disrespected – I don’t think that’s true with him.

"His father, Rod, played for the Astros. He was also a great college player at USC and maybe his father’s background helped him to understand that complaining doesn’t do any good. Just go out there and pitch well and you’ll get back [to the big leauges]."

Boxberger throws a fastball in the low 90s (topping out at 95), a slider, a curve ball and a change-up.

"He has such a relaxed and smooth delivery that it surprised me the first time I saw him pitch when I looked up at the radar gun and saw 95," Hagerty said. "He doesn’t look like he’s throwing that hard, but the ball really travels fast once he delivers it. He has a really good slider as well."