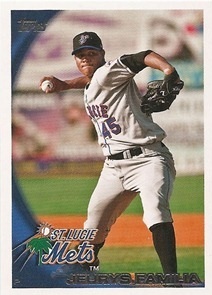 **New York Mets prospect Jeurys Familia suffered through a difficult 2010 campaign for High-A St. Lucie, struggling with his command and control, but he looked better late last year and has maintained that progress so far in 2011. He made six starts this spring for St. Lucie, posting a 1.49 ERA with a 36/8 K/BB in 36 innings with just 21 hits allowed. This earned him a promotion to Double-A Binghamton, where he's kept the momentum going with a 12/3 K/BB and just eight hits and two runs allowed in his first 14 innings. Overall, he's got a 1.25 ERA with a 48/11 K/BB in 50 innings this year with a miniscule 29 hits. Stuff has never been his problem: he gets past 95 MPH and has made big strides commanding his slider and changeup this year. As I wrote in the book this year, he is "a pitcher who could break out at any time" and was "someone to take a close look at while his stock is down a bit."  His stock is no longer down, and he'll rank highly on top prospect lists for 2012 if he continues to pitch like this.

**Another pitcher rebounding from a tough '10 is Texas Rangers lefty Martin Perez, currently sporting a 2.66 ERA with a 42/19 K/BB ratio in 41 innings for Double-A Frisco with 31 hits allowed. He's still got some command issues to work out, but Texas League sources report that in general he looks much better than he did last year, throwing harder more consistently and showing more bite on his breaking ball. He is still just 20 years old and his upside remains as high as any pitcher in the game.

**Kansas City Royals prospect Jake Odorizzi continues buzzing along at High-A Wilmington. He had a bit of a rough start on May 15th, giving up six hits and three runs in 4.2 innings, but the start before that he fanned 13 and allowed just one hit in six innings. Overall he has a 2.45 ERA with a stunning 55/8 K/BB in 37 innings, 28 hits allowed. A Royals official joked with me last week that they were waiting until Odorizzi's K/BB ratio reached "100/15" before promoting him to Double-A, but I suspect he'll be moving up before that, lol. Reports indicate improvements with his breaking stuff this year along with his trademarked outstanding fastball command.

**Atlanta Braves pitching prospect J.J. Hoover was promoted to Triple-A and made his first start for Gwinnett last night, allowing five hits, four walks, and four runs in four innings of work. Before his promotion, he had a 2.16 ERA with a 41/10 K/BB in 42 innings for Double-A Mississippi, so the move to Gwinnett was earned even though the first start didn't go well. Hoover has been a personal favorite of mine for awhile, with a four-pitch arsenal (90-93 MPH fastball, curve, slider, changeup) and a strong build that promises durability. His normal pattern is to struggle a bit in his first few starts at a new level, but to adapt and succeed eventually. I think we could see him in Atlanta late this  year, and he projects as a solid inning-eater type.

Buy some books or .pdfs guys!!