The Recent History of Catching Prospects, PART ONE

Share All sharing options for: The Recent History of Catching Prospects, PART ONE 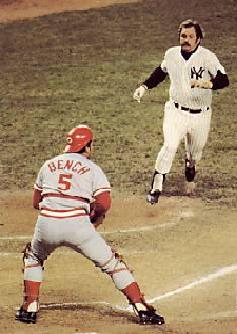 Here is a look at the Top Catching Prospects in baseball over a fourteen year period, as identified in the STATS Minor League Scouting Notebook (1995-2002) and the Baseball Prospect Book (2003-2008). My friend Eddie Epstein wrote the ’95 edition of the old STATS book, and I wrote the subsequent editions until STATS dropped the book. I began to self-publish in 2003.. Here are the catchers who appeared on the Top 50 prospects lists.

COMMENT: Johnson of course had a long and productive career with a decent bat and strong defense. Casanova never lived up to his early potential, partly due to injuries, but is still hanging around as a backup catcher. Greene was a converted outfielder with a power bat and bad plate discipline. He had a decent run as a bench player in the mid-2000s.

Todd Greene, Grade B+: see above.

COMMENT: Valentin’s bat stagnated when he reached Double-A, and he struggled offensively upon reaching the majors in 1998 at age 22. He’s carved out a career as a backup. Sweeney converted to first base and was one of the best hitters in baseball for awhile. was excellent from 1996 through 2000 but began declining after that, worn down by the position.

Mike Sweeney, Grade A-: See above.

Javier Valentin, Grade B+: See above.

COMMENT: Cline was a very solid prospect 1995-1996, but started to have strike zone judgment and injury problems in 1997. He rebounded with a good year in Triple-A in 1998, but after that he fell apart completely and was out of baseball by 2001.

COMMENT: Hinch had an outstanding year in A-ball and Triple-A in ’97 and had a good glove rep to boot. Handed ’s catching job in 1998, he failed to hit and it was all downhill from there, dogged by strike zone problems and injuries. Hernandez has been a solid regular. Petrick reached the majors in 1999 and played well that year and in 2000, but he started to have health problems and his career ended early due to Parkinson’s Disease. King was a flash-in-the-pan guy who played well at a young age in 1997 but who failed to hit in Double-A, got too fat, saw his defense fall apart, and was out of baseball by 2003.

Ramon Hernandez, Grade B+: See above.

COMMENT: Barrett was a good player for awhile but faded very quickly once he hit age 30. Pena showed he could mash the ball in the minors, but never did the same in the majors and got too fat. Meluskey had a great year for the Astros in 2000 (.300/.401/.487) but vanished after that, ruined by back and shoulder injuries.

Ben Petrick, Grade A-: See above.

Ramon Hernandez, Grade B+: See above.

COMMENT: LeCroy had success as a platoon player, catcher/1b/DH type for the Twins.

COMMENT: House had injury problems and gave up baseball for football for awhile, but he still has an outside chance to do something. He is a career .310/.372/.496 hitter at the minor league level and under the right circumstances he could be a LeCroy type.

COMMENT: Werth converted to the outfield before reaching the majors. Mauer is terrific of course. Buck has stagnated offensively and doesn’t look like he will improve at this point.

Joe Mauer, Grade A: See above.

John Buck, Grade B+: See above.

COMMENT: was excellent until 2008. Mathis can’t hit but could hang around a long time as a reserve. His bat stopped developing in 2004. Huber moved to first base, has had some nagging injury problems, and looks like a bust right now. Brown was Mr. Moneyball and had fair success in Double-A and Triple-A, but retired after 2007. He could probably have been an OK backup if he hadn’t quit.

Joe Mauer, Grade A: See above.

Jeff Mathis, Grade A-: See above.

Justin Huber, Grade B+: see above.

COMMENT: Navarro looks like he will have a long career though the exact shape is still uncertain. Quiroz’s bat stagnated and he looks like a guy who will bounce around Triple-A and the majors for a long time.

COMMENT: Barton converted to first base. He struggled in 2008 and while still young, it remains to be seen if he will live up to his early potential. McCann is terrific and just getting better. Love the power/low strikeout combination.

Neil Walker, Grade B+: Not in majors yet.

Brandon Snyder, Grade B+: Not in majors yet.

COMMENT: I think Clement just needs more time, but a change of scenery might be helpful. Martin is excellent and his superb plate discipline really helps him. His heavy workload may wear down his bat however. Kottaras has been unable to duplicate his 2005 breakout but could still have a career as a reserve. Walker and Snyder are no longer catchers.

Jeff Clement, Grade B: See above.

COMMENT: Iannetta had a rough debut in 2007 but was more effective in 2008, obviously it is too early to know exactly what will happen with guys at this stage. Montero is still trying to get established as well.

Matt Wieters, Grade A-: Not in majors yet.

Jeff Clement, Grade B+ See above.

Hang Conger, Grade B+: Not in majors yet.

COMMENT:  Wieters looks outstanding in the minors and I have full confidence in him. Teagarden should be a solid player if injuries don’t hold him back. Soto is really good; the only question now is how much durability he will show. Towles was a big disappointment but deserves another shot. Too early to tell about Conger of course.

Let’s organize this a different way. My grading has changed over time and I’m a much tougher grader now than I used to be. But breaking this down a bit, and eliminating anyone who hasn’t played in the majors yet,

Players who were Grade As at one point:

Javier Valentin: Bust compared to expectation. I was an easier grader then.

Players who were Grade A-

Mike Sweeney: Excellent at another position.

Daric Barton: Too early to tell, now at another position.

Jeff Mathis: Too early to tell, don’t like current trends.

Players who were Grade B+

Todd Greene: Some success, held back by injuries, plate discipline.

J.R. House: Looked like an injury bust, could still contribute.

John Buck: Stagnated with bat but has held job.

George Kattaras: Could bust, still has outside chance to contribute.

Miguel Montero: Too soon to give up on.

Taylor Teagarden: Too early to tell, but should be good if healthy.

In Part Two, we will look at all current major league regular catchers (300 at-bats or more in 2008) and see where they came from, and how they rated as prospects. Then in Part Three we will see if we can draw some conclusions from all this data.