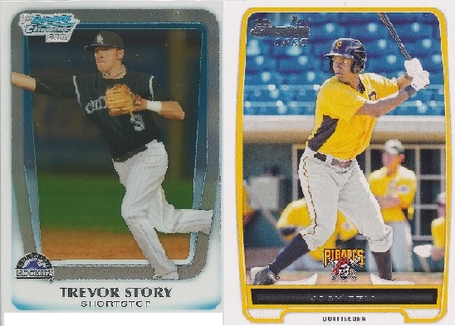 A lot can change in one year, let alone two.

Two years ago, Trevor Story and Josh Bell were elite Texas high school prospects, Story as a multi-skilled shortstop from Irving, Bell as a power-mashing outfielder from Dallas. Both were highly-regarded, though Bell's upside (as a hitter anyway) was considered better.

Story ended up going in the supplemental first round of the 2011 draft, selected by the Colorado Rockies. He signed without problems for $915,000. Bell was different: he was firmly committed (so it was thought) to getting an education at the University of Texas and was considered unsignable. The Pirates drafted him in the second round anyway, then signed him at the deadline for $5,000,000, a record for a non-first round pick.

Bell's 2012 was much different: he fanned 21 times and drew only two walks in his first 62 at-bats for Low-A West Virginia (with an overall line of .274/.288/.403). The sample was small of course but it was also very different than expected from a hitter who was renowned as a prep for his plate discipline and excellent power. His season ended after just 15 games in April with a torn meniscus in his left knee. The injury healed slowly and he wasn't ready for instructional league.

Bell entered '13 as a question-mark (albeit one with a high ceiling) while Story looked like one of the best shortstop prospects in baseball. It is the end of April now and while less than a month of games is still a small sample, the two Texans appear (on the surface) to be heading in opposite directions.

Bell is back in action for West Virginia, hitting .268/.301/.464. He's healthy again and driving the ball, though he's also still showing a lack of patience with just five walks and 26 strikeouts in 96 at-bats. He was quite disciplined in high school, but that asset hasn't shown up in pro ball.

Bell may have some glitches in his approach, but he' still doing better than Story.

The shortstop is struggling with even worse contact problems in the California League, hitting a disturbingly poor .158/.264/.263 with nine walks and 33 strikeouts in 76 at-bats for Modesto. Word is that he is excessively pull-conscious and overaggressive. This showed up at times last year in the Sally League, but he got away with it much of the time against weaker pitching. This has not been true in the more difficult California League.

Superficially Bell is performing much better this year, but ultimately both players are having issues with contact and plate discipline. Bell may very well struggle as well once he moves up to High-A without some adjustments in his approach. That said, both of them are equivalent to college sophomores and have plenty of time to work out their issues. Patience is advised, both literally and figuratively.