Another weekend of the college baseball season is in the books as we slowly begin to get a picture of who the favorites are in each conference.

I submitted this entry a touch later than usual due to prior engagements. Delayed but never denied, I bring forth with me my college baseball weekend highlights:

- Best Team: #1 North Carolina - They're back! LSU actually lost a game this weekend while UNC whooped up on Virginia Tech in a three game sweep. The Heels are now 34-2 (15-2 ACC).

- Best ACC Smackdown: #5 Virginia at #19 Georgia Tech - While UVA was able to keep GT's bat relatively cool, the Yellow Jacket pitching staff did their part as Tech won a pair of one run game to win the series. Buck Farmer, who will make a great Senior sign, threw a CG with 10 K in Georgia Tech's Friday night win.

- Sweeper of the Week: Michigan State - Let's hear it for the Spartans who nailbited their way to three one run victories, all in walkoff fashion, over the previously red hot #13 Indiana Hoosiers.

- Surprise Team of the Week: Seton Hall - The unheralded Pirates only went into #28 Houston and won the series blasting the Cougars 11-1 and 15-1 on Friday and Sunday, but dropping Game 2, 4-0. Talk about all or nothing.

- Disappointing Team of the Week: #10 South Carolina - Any faint hope I had of the Gamecocks catching Vandy in the SEC East has been shattered after getting swept by Florida. I know, way to make this about South Carolina and not give credit to the rebounding Gators. SC and Florida now tied at 8-7 in SEC East.

(Special thanks to Tami Cutler for the photo)

- Pitcher of the Week: Cale Elam - RHP - Wichita State - He had an outstanding complete game shutout performance versus Bradley with only 5 hits allowed, 0 walks, and 13 strikeouts. In my honest humble opinion, I think he deserves more recognition as a draft prospect as he's a junior who has put up great numbers on the season and throws in the 88-92 MPH range with great movement according to baseball draft report. 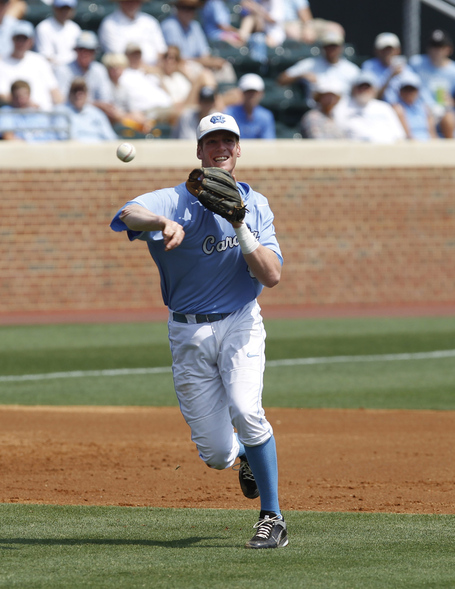 - "For He's a Jolly Good Hero" Award: Jimmy Pickens - OF - Michigan State - Pickens had not one, but two walkoff hits in the Spartans big weekend upset of Indiana.

- Crucial Loss of the Week: Skye Bolt - OF - North Carolina - The uber-talented freshman outfield for the Heels is out indefinitely with a broken foot.

- Implosion of the Week: Cody Dickson - LHP - Sam Houston State - Dickson, one of the top Southland prospects, had a nightmare-ish outing on Friday, getting torched by Lamar for 11 ER on 8 hits in just 3.2 innings of work. Lamar won the series.

- Stock Rising Award - Ben Lively - RHP - Central Florida - As a former teammate of my brother's on the Youse's Orioles in the Cal Ripken League, it's great to see Lively dominating (1.09 ERA in 65 IP) for Knights this year. Perfect Game highlighted the talented junior, now considered a 2nd round prospect, in their weekend preview.

- Best Catcher in College Baseball: Zane Evans - C - Georgia Tech - Evans was considered the best defensive catcher in the ACC by Baseball America in their conference preview. Not only that but he has had a monster breakout season at the plate (.348/.434/.636 with 10 HR, 23 BB, 17 SO).

Note: I don't believe it. Thomas Eshelman of Cal State Fullerton actually walked a batter this week, his first walk allowed in 60+ innings on the season. I couldn't find any new and interesting individual streaks so the streaker of the week has been retired for now.