Jonathan Gray has all the makings of a front line starter. 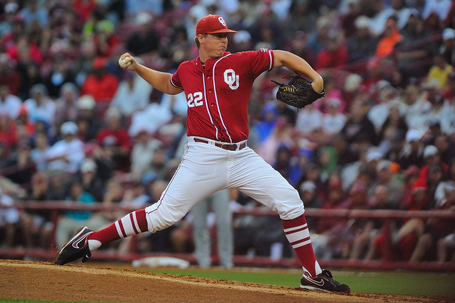 Each year there are a couple guys who fly up draft charts. I usually am skeptical of players like this but Gray is an exception. Gray has already been drafted twice: in the 13th round out of high school by the Tigers and the 10th round after his first year at Eastern Oklahoma JC by the Yankees.

He has always been a big guy. He was 6'4", 240 in high school and had a fastball that could touch 94 at that point. In junior college he was up to 97 but still needed mechanical work to gain command of his fastball and improve his secondary pitches.

Well, that has happened. The fastball can now hit 101and sits 96-98. He works in the 94-95 range out of the stretch and hits 94 more when he's taking something off the fastball to get it across the plate. It tails aggressively in towards right handed batters on occasion but it isn't consistent movement. It's an 80 pitch.

His hard curveball/slider, whatever you want to call it, sits 86-88 MPH. He overuses it. I can understand why. It is a plus-plus pitch but I am concerned that it could be an issue if he gets too reliant on it. I didn't see a change from him at all. He didn't need one. I'm sure he will be able to develop one, even if it is average or tick below, it will do what he needs as a starter, playing off of that fastball.

His steady progression, not a quick increase of 7 MPH over a summer, leads me to believe his improvement is for real and will continue going forward.

Looking at his stuff, he is a top of the rotation guy. Not a #2 or 3 but a true #1. He pounds the strike zone, he works inside and out. He has good downhill plane on his stuff.

On the negative side, he isn't a great athlete. He is a big, strong guy who will need to work hard to keep in top shape and make sure he doesn't get too bulky to restrict flexibility as well. Physically, he is in the Roger Clemens/Curt Schilling mold. If his mechanics fall out of sync, he could lose command quickly. He needs to continue to improve his consistency.

Gray could go #1 to the Houston Astros. Considering they will likely be in the running for #1 overall again next season, a future rotation of Gray and Carlos Rodon could be making an impact in the majors as soon as 2015. That's what Houston needs. If they don't take him, there is no chance he makes it out of the top five.