A look at some of the talent on display in Austin as Texas Tech took a series from UT.

Back "home" in Austin this weekend to catch the Texas-Texas Tech series. Lots of talent here, especially on the mound. UT has always been known for its pitching and defense, but this year Texas Tech has the premier arm in the series. Staff ace Trey Masek had yet to allow an earned run on the season coming in. 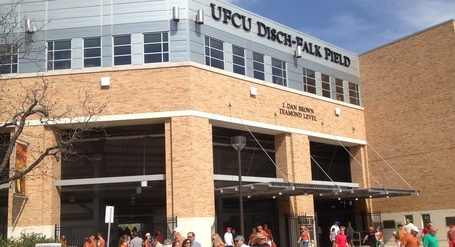 Disch-Falk Field in Austin is big but not the most visually pleasing stadium out there. They've made improvements recently which have helped, but it still just feels a little bit plain on the inside. The best part of the stadium is the large open terrace down the left field line that lets you wander and watch the game. Also this is another all turf playing surface. This does play into the hands of the Longhorns, who use pitching, speed, and solid defense to win most of their games. UT has hit almost three times as many triples (8) this year as home runs (3). 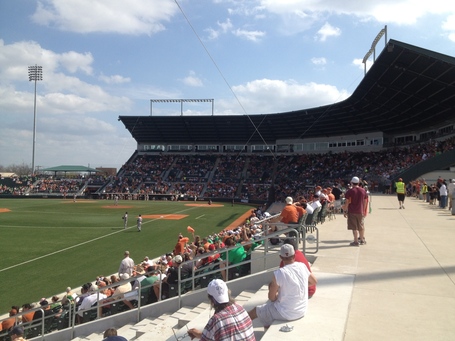 Pitching was the name of the game on Friday, as both starters threw up zeros. Six innings for Parker French (Soph) of UT and seven for Dominic Moreno (Soph) of Tech. There was a bit of a tense moment for Longhorn fans when French came out to warm up for the seventh inning and quickly came off the field. He had a season-ending elbow injury last year but this doesn’t appear to be anything severe. Ty Marlow (Jr) came in for the Longhorns and promptly gave up a home run to Jarrard Poteete (Fr). This would be the only run scored on the night.

In the bottom of the ninth, Mark Payton (Jr) led off with a single before CJ Hinojosa (Fr) bunted for a base hit. Two on and no out, UT couldn’t tie the game. On the day, Texas left 12 runners on the bases. Jerad McCrummen (Sr) earned the save for Tech with two scoreless innings. For UT, Josh Urban (Jr) faced six batters, walking one and striking out five. 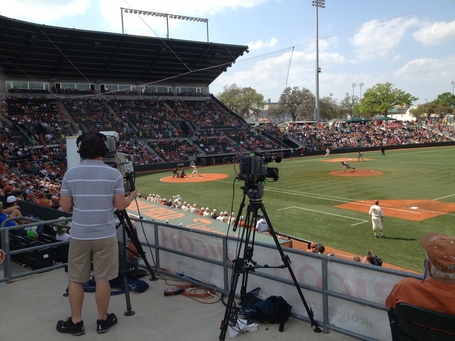 Saturday was the premier pitching matchup of the weekend, and it certainly lived up to its billing. Tech ace Trey Masek (Jr) entered the game with 0 ER on the season, but he saw that streak snapped in the bottom of the first. It looked like Masek struggled a little (very little) with his control on the night, missing low early and missing high later in the game. He finished with three walks, after only allowing 6 previously. Regardless, he had a sparkling line and his ERA is still best in college baseball.

UT showed some of their trademark defensive prowess in this game. Mark Payton had a marvelous diving catch to end the fifth inning. In the seventh a Tech single should have plated a Red Raider from second, but a money throw from Weston Hall (Jr) to a perfect relay from Hinojosa cut down the runner at the plate.

Texas got in a tight spot in the ninth when Dillon Peters (Soph) loaded the bases with one out. The sophomore was lights out up until that rough patch, throwing 8.1 innings and allowing only 1 ER on 5 H and 3 BB. Corey Knebel (Jr) came out of the bullpen and promptly struck out the next two Red Raiders to end the threat.

In the bottom half of the ninth, it was junior Jacob Felts’s turn to be the hero, with pinch-hit game-winning double. 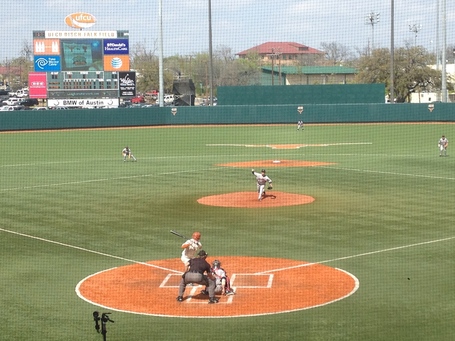 Sunday was throwback day in Austin, and had Texas wearing some snazzy old-fashioned uniforms. The rubber game of the series started off well for the Longhorns, as leadoff hitter Ben Johnson (Fr) hit a two-run homer in the second to give Texas an early lead. Tech starter Matt Withrow (Fr) lasted only two innings, but the Red Raiders were able to settle down behind the masterful relief of Jonny Drozd (Jr). Drozd threw 5.1 innings of scoreless ball allowing only four hits and no walks and throwing only 52 pitches.

Texas Tech was able to tie the game in the top of the third with an RBI sac bunt to the pitcher. They put the final nail in the coffin in the seventh when Jake Barrios tripled and then scored on a wild pitch. McCrummen would enter the game in the eighth inning and earn his second save of the weekend with 3 Ks over 1.2 scoreless innings. 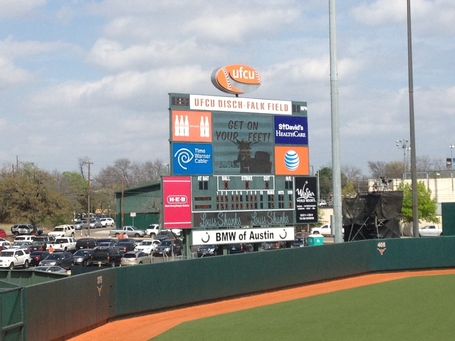