Lorenzen is a great athlete, but how does he fit into the draft?

Long limbs and a lean build put Lorenzen perfectly in that "projectable" mold. He currently covers ground well in center field but also has the arm to be an above average right fielder. His arm is his best asset, though he shows all five tools. His arm is a 70 on the scouting scale and someone who saw him on his best day may put an 80 on it. He can hit 98 off the mound, and there is a possibility that he ends up there. He flashes a plus slider off the mound as the closer for Cal State Fullerton as well. He covers a lot of ground and could be a starting center fielder in the majors if he hits enough.

If he can continue to play up the middle, it vastly improves his chances to be a major leaguer, as well as improving where he should be drafted. This will be a tough decision on how to project Lorenzon for some scouts. At the plate, Lorenzon is mediocre. He won't hit for a lot of power, more doubles power than over the fence power. His approach is less than impressive and while he doesn't strike out a lot, he doesn't walk at all and is an aggressive hitter. He could really be improved from a more patient approach. Even though he swings a lot, I don't like the swing. I'm not sure how to describe it but it is weak and inconsistent. It could work for him if his hand eye is exceptional, otherwise it will always be a struggle.

On paper, Lorenzon looks good from a tools perspective: 70 arm, 70 defense up the middle, 60 speed, 40 power maybe, 40 bat maybe. You can project more on the bat and power, and if you are optimistic about those skills developing, he's a solid regular. My problem is if the bat doesn't develop, he's a reserve outfielder and a tough sell in the first two rounds.

Lorenzen could fall back on pitching with velocity that could project a fastball as a 70 and a slider that could be an out pitch. In other words, he's a closer type. Some scouts prefer him in that role and how that all balances out will determine where he slots on draft day.

Lorenzen is a tough call. He reminds me some of Bubba Starling with less power at the plate. Someone who loves athletes will take him early. He's a good prospect but there is still a lot of uncertainty about his future. 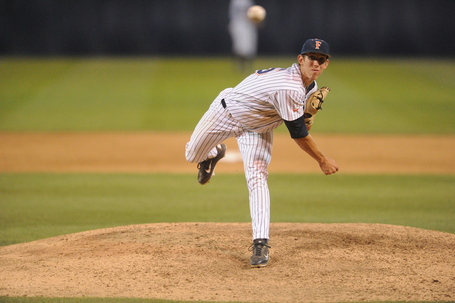