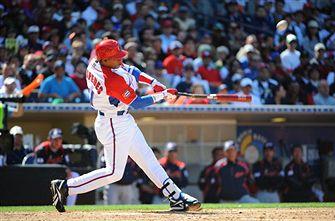 
This is really tricky. I'm not "in" the loop here, as I don't have any direct contacts in the D.R. or other Latin American countries but I do have names I've heard or read that have yet to sign. I may have missed the signings as well as many of these don't get a lot of attention. In other words, this is a work in progress and always will be. Nothing with International talent is transparent.

1. Yoennis Cespedes, OF. The Cuban defector has a couple hoops he needs to jump through before being decalred a free agent and able to sign, but he could be within a couple weeks or a couple months. There is a lot of red tape here. When he signs, he shouldn't need more than some time to acclimate to the U.S. before making his MLB debut. He could be treated similar to Leonys Martin last season.

2. Jorge Soler, OF. A younger version of Cespedes is going through a similar situation. I might prefer his potential to Cespedes but he would probably begin in Low-A or maybe High A ball as a 19 year old. A cautious team may even place him in their complex level team in the Gulf Coast or Arizona league before sending him to a full season league next year. Timing will also be a large part of this. Whoever signs him will need some patience.

After that there is a drop off. There is a talented Dominican named Helsin Martinez who I was impressed by but no one has signed him and I haven't heard anything about him lately. Not sure what's happening with him now, but I'd place him 3rd here based on talent. After that, none of the pre-July 2nd guys are big names that you should get very excited about.

I wrote about some of the signings from this season here as well.

After the jump is a list of player I believe to be international free agents as well as some July 2nd names. I haven't done my due diligence on them yet but I will have a report about them prior to J2.

Like I said, some may have signed and I missed them but here they are: