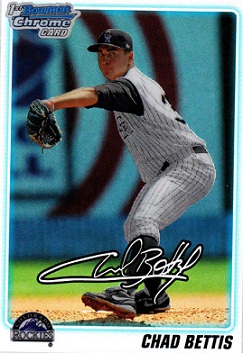 **The Colorado Rockies drafted right-hander Chad Bettis in the second round in 2010, out of Texas Tech. He was both a starter and closer in college, but the Rockies are developing him as a starter, with good results so far this year in the California League. Bettis is 6-5, 3.66 ERA, with a sharp 114/29 K/BB ratio in 106 innings, 96 hits allowed, thus far for Modesto. He had a particularly impressive start in his last outing on July 8th, allowing one earned run in seven innings, fanning 11.

Bettis works at 93-94, pushing 96-97 at his best. His slider is very solid, often plus, and he's made significant progress with his changeup this year according to California League observers. Three major league pitches and sharp command make Bettis a moundsman to watch closely. The Rockies are often conservative about moving pitchers up the ladder, even college guys, but I think Bettis is ready for a Double-A trial.

**The Texas Rangers drafted Will Lamb out of Clemson this year in the second round. A two-way player and a fine center fielder in college (he hit .348/.389/.471 with 13 steals this year), he's being developed as a pitcher in pro ball, thanks to a fastball that can hit the mid-90s and a promising slider. He pitched 25 innings for Clemson this year with so-so results (5.28 ERA, 29/11 K/BB, 24 hits in 25 IP), but has looked strong in his initial professional exposure for Spokane in the short-season Northwest League, posting a 17/4 K/BB in 10 innings, with a 3.60 ERA and eight hits allowed. The sample is tiny of course, but excellent K/IP marks him as a pitcher to watch. He's very tall at 6-6, but skinny at 180.

**University of Miami-Florida third baseman Harold Martinez is one of the most enigmatic players available in the '11 draft class. His college performance was erratic; he hit 21 homers in 2010, but just three homers with the de-juiced metal bats in 2011. The Phillies drafted him in the second round. In his first 21 games for Williamsport in the short-season New York-Penn League, Martinez is hitting .269/.430/.358 with 19 walks in 67 at-bats, but no homers. He is patient and will take a walk, but he also strikes out a lot (25 whiffs already). He struggles to translate his raw power into consistent production, but the Phillies think his swing issues can be corrected. He's a very good defender at third base, reliable, strong arm, enough range that he played some shortstop in college. The glove will keep him employed long enough for us to see if the bat will develop.

**The Oakland Athletics drafted catcher Nick Rickles out of Stetson University this year in the 14th round. It was odd that he fell this far in the draft; he was getting third/fourth round buzz from multiple sources before draft day, and there was certainly nothing wrong with his college performance. He hit .347/.408/.600 with 12 homers for Stetson this year, drawing 25 walks with just 10 strikeouts in 245 at-bats. How often do you see a guy with more homers than strikeouts? His defense drew mixed reviews. He has a good arm and is mobile, but some problems with his throwing mechanics kept him to a 33% caught stealing rate.

Anyway, whatever the issue he fell to the 14th round. So far he's performed very well in pro ball, hitting .308/.426/.462 in his first 11 games split between the Arizona Rookie League and short-season Vermont in the NY-P. He's drawn six walks against six strikeouts. He's also thrown out 50% of guys trying to steal on him. The sample is too small to mean much of course, but if he can duplicate that power/contact approach he showed in college and provide even average defense, he's a bargain that late in the draft.