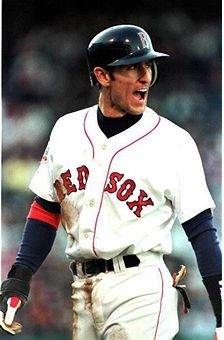 A college star at Georgia Tech, Nomar Garciaparra was drafted by the Boston Red Sox in the first round of the 1994 draft, 12th overall. In college he drew raves for his defensive ability and his line-drive hitting skills. He hit .427 with 26 doubles 11 triples, 16 homers, and 33 steals for the Yellow Jackets. There was some question about how much power he would show in pro ball, but he wasn't expected to need long in the minors. He hit .295/.356/.419 in 28 games for Sarasota in the Florida State League after signing, with 10 walks and just six strikeouts in 105 at-bats. A similar player now would get at least a Grade B+.

Garciaparra was sent to Double-A Trenton for 1995. He hit .267/.338/.384 with 50 walks and 42 strikeouts in 513 at-bats. His makeup and fielding were lauded, and while he didn't hit especially well in terms of power or batting average, his BB/K/AB was excellent, and many scouts felt his offense would improve. In the 1996 book, I wrote "I expect this, too: a former soccer player, he's a great athlete, has wiry strength, and already has command of the strike zone."  I gave him a Grade A- and ranked him as the Number 17 hitting prospect in the game.

Injuries struck in 1996: knee and ankle problems limited him to just 43 games for Triple-A Pawtucket, although his performance in those 43 games was amazing: .343/.387/.733 with 16 homers. He hit .241/.272/.471 in a 24-game trial with the Red Sox late in the year. The "improved offense" that scouts expected manifested itself with a vengeance. Impressed, I wrote "assuming the knee problem is not a long-term issue, he should develop into a Barry Larkin-type player. It will be fun watching him, Derek Jeter, and Alex Rodriguez battle for Silver Bats and Gold Gloves."  I gave him a Grade A and had him ranked as the Number Three prospect in baseball, behind Andruw Jones and Vladimir Guerrero.

Garciaparra played 1434 games over 14 seasons, hitting .313/.361/.521, OPS+124, WAR 43.2. His Sim Score list is quite strange: Michael Young, Joe Gordon, Bret Boone, Wally Berger, Travis Fryman, Vern Stephens, Babe Herman, Tony Oliva, Bob Meusel, and Ken Williams are the Top Ten But none of his Sim Scores are higher than 869, a very low score, which means that Nomar was an archetype player, not someone truly similar to anyone else.

If you can imagine Tony Oliva playing excellent shortstop defense, that was Nomar at his peak

He was considered a certain Hall of Famer early in his career, but his inability to stay healthy in his 30s hurt his case. His Black Ink score is just 15 (average HoFer is 27). Gray Ink: 78 (144); Monitor 112 (100), Standards 41 (50). His career 43.2 WAR ranks 44th All-Time among shortstops. Players in that territory include Dave Concepcion, Dick McAuliffe, Alvin Dark, Maury Wills, and Dick Groat. Nomar certainly played like a Hall of Famer at his peak, but he didn't last long enough.

As a prospect, he showed an exceptionally good BB/K/AB ratio with a fair number of walks and very few strikeouts. He didn't develop his power until he reached the majors, although even when he was hitting just eight homers in Double-A, many scouts saw the potential for much more power in his bat.