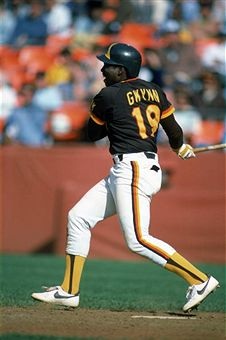 Per reader request, here is a Career Profile for Tony Gwynn, Sr.

Tony Gwynn was drafted by the San Diego Padres in the third round of the 1981 draft, out of San Diego State University. Assigned to Walla Walla in the Northwest League, he hit .331/.415/.612 with 12 homers and 17 steals in 42 games, showing excellent plate discipline. Promoted to Double-A Amarillo in August, he hit .462 with a .725 SLG in 23 games. Coming out of college, he was a respected line drive hitter with good speed and plate discipline, but his pro debut was much stronger than even his backers anticipated. I think you'd have to rate him as a Grade B+ prospect considering his early performance.

Could this kind of career be foreseen in his minor league record? It was clear from an early point that he was a very skilled line drive hitter, and his early pro performance was outstanding. But did anyone actually project that Gwynn was a Hall of Fame talent when he was in college, or when he was in the Pacific Coast League in 1982? No. The general consensus that I remember back then was that Gwynn was seen as a guy who would be a good regular and someone who'd hit .280-.300, but he wasn't seen as a possible Hall of Fame type when he was a prospect.