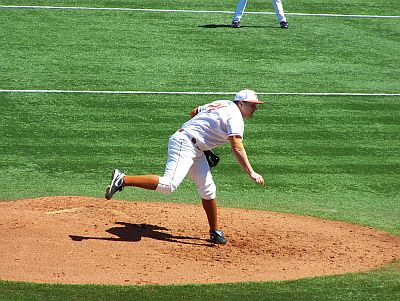 There are a lot of other interesting college pitchers and we'll do reports on them, too, as the spring progresses.

Andrew Chafin, LHP, Kent State: 6-2, 210 pound lefty, a sophomore. So far, 3-1 in six games, 0.53 ERA, 42/8 K/BB in 34 innings, 18 hits. Fastball reportedly hitting 95 MPH this year, also has a good slider, statistics are obviously strong. A draft-eligible sophomore after missing 2010 with Tommy John surgery. Looks healthy and strong right now, and if that remains so, he could sneak into the back of the first round. I doubt he gets past the supplemental or early second.

Adam Conley, LHP, Washington State:  6-3, 180 pound lefty. So far, 4-2 in six starts, 2.38 ERA, 43/4 K/BB in 42 innings, 40 hits. Saved 12 games in 2010 but converted to rotation this year, obviously with no ill effects so far. Has reportedly hit 95-96 MPH this spring. Good changeup and consistency of curveball and slider are improving too. You have to love the K/BB. Seen as a third round type pre-season, his stock is rising although the deep nature of the draft makes his position hard to pinpoint just yet.

Brian Dupra, RHP, Notre Dame:  6-3, 205 pound righthander, a senior. Had a career 6.40 ERA over three seasons entering 2011, but much better this year: 1.96 ERA, 44/9 K/BB in 41 innings. Works at 90-93 and has hit 96 at times. Throws a changeup but inconsistent breaking stuff kept him from great success in past seasons. Dramatic improvement in stats this year is notable. Is it the different bat, or has he figured something out? He's definitely worth tracking.

Cole Green, RHP, Texas. 6-0, 210 pound senior. So far, 4.05 ERA with a 41/4 K/BB in 33 innings, 31 hits. ERA is misleading and excellent K/IP and K/BB ratios are a better indicator of his talent I think, especially given past track record. Fastball not great for a righthander at 88-92, but he has superior location and the fastball plays up due to contrast with his slider and changeup. He keeps the ball down and throws strikes. Might be a reliever in pro ball but could also turn into a number four/five starter type.