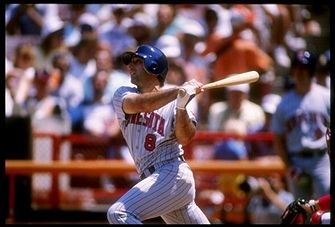 A reader suggested that a profile for Gary Gaetti would pair well with the one for Kent Hrbek. These two players are permanently associated in the minds of Twins fans as part of the big rookie class of 1982, so a profile is logical, plus Gaetti was a very interesting player as both a prospect and a big leaguer.

Gary Gaetti was drafted in the secondary portion of the June 1979 draft, in the first round. The draft in the old days required players who were previously drafted but did not sign to enter a special "secondary" phase. In a modern draft he would probably have been a second round pick. Gaetti played college baseball at Northwest Missouri State University, the same place I graduated from 11 years later.

He was assigned to Elizabethton in the Appy League after the draft, hitting .257/.378/.522 with 14 homers in 66 games, with a 43/40 BB/K in 230 at-bats. His power was obvious and he also impressed scouts with his defensive potential. Looking at a speculative retroactive grade, I'd probably give a similar guy a Grade B- nowadays, perhaps a B depending on the exact scouting reports. The only negative is the low batting average but his power and strong BB/K mark would have stood out as positives.

Jumped up to Double-A for 1981, Gaetti hit .277/.354/.505 with 30 homers, 15 steals, 58 walks, and 105 strikeouts in 495 at-bats for Orlando. He was promoted to Minnesota for September and went 5-for-26 (.192) with two homers, which was enough to get himself penciled in for the starting third base job in '82. A similar player now would get a very strong Grade B or a B+ from me. The only negative remained the low batting average but the power, walks, and defensive rep would make up for that.

Comparable Players to Gaetti: Graig Nettles, Ron Santo, Joe Carter, Chili Davis, Ruben Sierra, Tim Wallach, Don Baylor, Darrell Evans, Dale Murphy, and Brian Downing. None of those Sim Scores are higher than .895, which means Gaetti was a fairly unique player. He wasn't a Hall of Fame type obviously (Monitor is 52, HoF average is 100; Standards is 30, HoF average is 50), but he was quite valuable and lasted an unusually long time.