What's up With Wyoming??? ...and Other Random Thoughts--from JERI

Share All sharing options for: What's up With Wyoming??? ...and Other Random Thoughts--from JERI 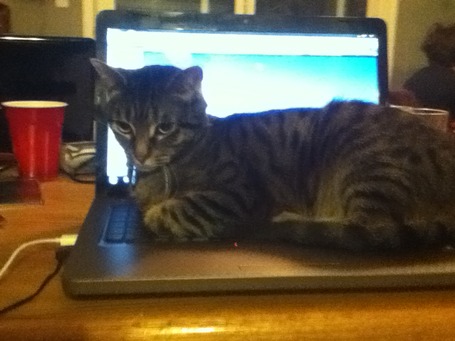 Dearest Readers,
John's busy, and asked me to start up a discussion here, so I'm taking over the blog for the rest of the day. I usually like to post one topic, but I can't think up anything that is interesting to me that is the length of one topic, so I'm doing a few unconnected thoughts. It's 12:30 in the morning as I write this, so keep that in mind...
What's up with Wyoming???
As many of you might remember, usually sometime around this time of year I post some fun facts about where our readers live. I'm very pleased with 49 of our states, plus the District of Columbia, and a few territories as well. OH! I forgot, several other nations, too.
However, there is a blight on JERI's Big Map O' Book Sales: That blight is Wyoming. Last year we had a presence in Wyoming, and there were a few other western states missing from the original totals (although we did end up selling in all 50 states last year). Thanks again, Idaho and Montana! Looking good this year!
So, Wyoming, what's next? You'll be saying that you don't like Apple Pie any more? Cherubic Babies? Buicks? I'm not trying to hurt any feelings, I'm just saying that I think you could do better.
Many other fine states (49, to be exact) managed to place at least one order...I see no reason at all for Wyoming to stand alone...go ahead...give into peer pressure. Just one little order. Everyone else is doing it!
**Other unrelated random thoughts after the jump**
RANDOM THOUGHT 1: Does Easter seem oddly timed this year? It's at the end of April, and I'd swear that it's usually late March or early April... and what about the Daylight Savings thing? Did it come early? Am I just getting old and losing track of time? Does this have anything to do with the gray hair I found yesterday?
RANDOM THOUGHT 2: Are you guys getting tired of the repeated misuse of common words?
OK, sorry, no more school today... If I gave every example I have, no one would be awake by the end of this post, assuming that anyone is still reading!
RANDOM THOUGHT 3: Lawrence, KS (where we live, of course!) is a basketball town. Maybe it's because Naismith lived here--you know, Dr. James Naismith, Inventor of Basketball--maybe someone's been fixing the water supply to force most people here to love the game.  I dunno. I'm not a huge fan, at least NOT to the point of being seriously invested. However, my apathy is NO REASON for people around here to get touchy!
I saw tournament championship t-shirts for sale at a local grocery store, and very innocently commented that I thought the tourney was just starting. WELL. You'd think I had suggested smoking pot while lying on a bear skin rug in the middle of the Kansas State Senate Chamber. Apparently, there's some other tournament that people love just as much as the NCAA one (yes, I had to look up the name). And, if the T-shirts are anything to go by, KU, er, I mean WE won!
Is there a point to this? Well, no, not really...it's just one more reason to be excited about the baseball season starting up soon...this NCAA thing is over by then, right?
That's all I have...I think we are all hoping John is able to get back to blogging in a timely manner...if not, though, fear not.
IF there is a need, tomorrow's essay will be titled:
Apostrophes or Apostrophe's: All About Writing's Tiniest Hero
Best Regards,
JERI