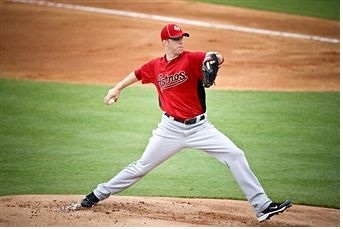 Prospect Smackdown: Kyle Gibson of the Minnesota Twins vs. Jordan Lyles of the Houston Astros

This particular Prospect Smackdown has been suggested by more than one person. Both of these right-handers should see major league action in 2011 and both are expected to take leading roles on their respective staffs within the next few years.

Gibson: University of Missouri right-hander Kyle Gibson was one of the best pitchers in college baseball in the first part of 2009, a certain first-round pick and candidate for the Top Five. However, a late-season loss of velocity and a stress fracture in his forearm dropped his stock, to the point where the Twins were able to pick him at 22nd overall. It still cost $1.85 million to sign him, over-slot money, but the Twins have no regrets following his impressive 2010 season. His makeup, work ethic, and feel for pitching are all highly-regarded.

Lyles: An outstanding high school athlete in Hartsville, South Carolina, Lyles was expected to play college ball at South Carolina and didn't rank highly on most draft lists in 2008. The Astros, however, had a better read on his signability than most teams, picking him in the supplemental first round, 38th overall, and signing him for $930,000. His makeup, work ethic, and feel for pitching are all highly-regarded and ahead of his age.

Advantage: Gibson had a higher profile as an amateur, but both of these guys have very strong makeup. This looks even to me.

Gibson: Gibson is a 6-6, 210 pound right-handed hitter and thrower, born October 23rd, 1987. Gibson hit 94 MPH in college but dipped down into the mid-80s late in the spring of '09. As a pro he's varied between 86 and 92 MPH, though even at the lower velocities his fastball has excellent sinking movement. He has a plus slider that helps his fastball play up. His changeup is also above-average although not as consistently good as the slider. His command and control are considered excellent. Health-wise, the main red flag is the stress fracture in '09. He's a good athlete and has a clean delivery, but has shown a tendency to wear down and lose velocity as the season progresses.

Lyles: Lyles is a 6-4, 210 pound right-handed hitter and thrower, born October 19, 1990. Lyles can hit 94 at times but works more commonly in the 88-92 range, with sinking action (although his heater doesn't have quite as much sink as Gibson's). He has a good slider, and a plus changeup, both pitches helping his fastball play up. His command and control are considered excellent, and he's a terrific natural athlete. His mechanics are clean and repeatable, and he's had no major health concerns.

Advantage: I rate their fastballs as even. Gibson has a better slider, but Lyles has a better changeup. Both throw strikes. Lyles is younger, a bit more athletic, and has a better health record. This is extremely close but I think I will tip it just a hair for Lyles.

Advantage: Both pitchers show good control and strong K/BB ratios and adequate strikeout rates. Both performed very well in Double-A last year, although Lyles was doing it at a younger age. Both are ground ball pitchers, though Gibson's tendency is stronger. Overall I prefer Gibson's statistical profile but it is close.

Gibson: A healthy Gibson projects as a strong number three or a number two starter, a guy who throws strikes, gets grounders, and eats innings.

Lyles: If Lyles lives up to his full potential, he projects as a strong number three or number two starter, a guy who throws strikes, gets grounders, and eats innings.

Advantage: I don't think either of them throws quite hard enough to be a classic ace-rotation anchor, but both can rack up 200 innings with strong K/BB ratios and consistently above-average performances from year to year, if they have any sort of competent defense behind them. And if they stay healthy, of course.

I rate them even on intangibles, Lyles with a slight edge on physicality due to his athleticism and health record, Gibson a slight edge on current performance, and even on projection. To show you how close they really are, I gave them both Grade B+ grades in the book, with Lyles ranked Number 17 on the pitcher list and Gibson ranked Number 18.