5 Orioles Prospects You May Not Know About

Share All sharing options for: 5 Orioles Prospects You May Not Know About 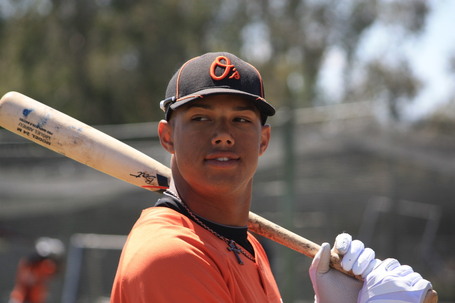 The O's system has seen its stock drop with tons of young talent graduating to the big leagues. With Zach Britton and Josh Bell set to graduate soon as well, the Orioles system could go from a top 10 system entering 2010 to a bottom 10 system at the end of 2010. The following players have the chance to become top 10 prospects in the O's system within a year or two.

Jesse Beal - The Orioles 14th round draft pick in 2008, Beal is a 6' 6", projectable righty. While his fastball isn't overwhelming, he features an above-breaking ball and walked a microscopic .95/9 IP in 2009 and 1.77/9 IP this year. He told me he's working hard to add weight, and had added around 15 pounds during the 2009 off-season before losing it after going down with the flu. Multiple players in the organization feel he could become a #2/#3 starter if he could add 2-4 mph to his fastball, which currently sits 86-88, topping out at 89, 90.

Tim Berry - A 50th round draft pick in 2009, Berry signed for 4th-6th round money. He dropped because he had Tommy John surgery before the draft. A lefty, he already tops out at 91, 92, and saying he's projectable may be selling him short. He has a nice breaking ball, which is a potential plus pitch. A lot of people overlook him because of his draft slot, but he should be included in the impressive group of young arms the Orioles have in the low minors. He's in the bullpen now, as he's being eased back from TJ surgery, but he'll be in a rotation within the next few years. Video >>

Dudley Leonora - Signed as a free agent out of Curacao in 2008, Leonora is a patient hitter with quick wrists and an advanced approach at the plate. He can play virtually any position besides catcher, but his future is likely third base. He throws from two different arm slots, side armed on routine plays but over the top when he needs to make a strong or long throw. He has good baseball instincts, and if you watch him play once, you're bound to see a spectacular defensive play. Leonora was recently promoted to Bluefield after only 20 games in the GCL. Video >>

Jonathan Schoop - Like Leonora, Schoop was also signed out of Curacao in 2008. The Orioles aren't big players on the international market, so when you see a pair of two, young, patient infielders like Schoop and Leonora advancing through the system, it's a big deal. Schoop already plays above-average defense at shortstop, but a move to third base is likely. He relies on arm strength too much and will likely lose range as he fills out. He's virtually a lock to stick on the left side of the infield. He has advanced pitch recognition and registered 7 walks and just 7 strikeouts in 60 at-bats in the GCL. Like Leonora, Schoop was also promoted to Bluefield after just 17 games in the GCL. One O's prospect told me the GCL O's are "doomed" now that Schoop and Leonora are no longer playing there. Video and a more detailed scouting report >>


Brenden Webb - In a system that lacks high upside and potential 5-tool outfielders (beyond Xavier Avery), Webb has the chance to become just that. He was signed for $180,000 as a 30th round pick in the 2009 draft. Webb has an athletic frame and a big upper body, and he's physically filled out. He has above-average speed, an above-average arm and can play any outfield position. He'll strike out a lot, but his walk rate, power and patience are at a level where you're willing to accept the extra K's.

Out of these 5 players, only Beal (7) and Webb (42) made my mid-season top 50 prospects. Beal has put together a nice season thus far, but he's still somewhat of an unknown. Berry, Schoop and Leonora didn't make my list.