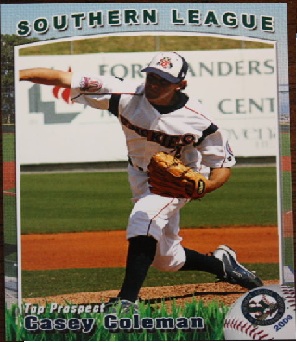 **Iowa Cubs right-hander Casey Coleman had a brilliant outing last night against Round Rock, throwing seven innings, allowing two hits and one run, fanning eight, and retiring 21 in a row at one point. Overall on the season, he is 6-5, 4.02 with a 45/19 K/BB in 78 innings, 69 hits allowed.
Coleman is 22 years old, drafted by the Cubs in the 15th round in 2008 from Florida Gulf Coast University.  He has great pitcher bloodlines: hisgrandfather Joe won 52 major league games, while father Joe won 142 more. Casey is not a big guy at 6-1, 180, and his stuff is not superb: 88-92 fastball, good changeup, workable cutter and curveball. He usually throws strikes, and as he showed last night, when he gets in a good rhythm he can disrupt hitters pretty badly. I see him as a possible fifth starter or long reliever, and he could get a major league shot later this year.

**Yasmani Grandal will become Cincinnati's top catching prospect when he signs. Where does this leave Devin Mesoraco? After disappointing seasons in '07, '08, and '09, he got off to a much better start this year with a .335/.414/.620 surge at Class A Lynchburg. The Reds promoted him to Double-A a couple of weeks ago, but so far the transition has been mixed. He's hit four homers in 14 games and has a .532 SLG, but his previous problems with the strike zone have returned and he has just two walks against 11 strikeouts in 47 at-bats, hitting .234. It remains to be seen if he can make further adjustments to Double-A pitching, but he doesn't turn 22 until this weekend so he's still quite young. Mesoraco is handling baserunners well, throwing out 44% at Lynchburg and seven out of ten so far in Double-A, but he continues having problems with errors and passed balls, coughing up 10 PBs already this year. Basically, he's made some progress, especially with the bat, but I do think Grandal is a better prospect at this point.

**Another interesting Double-A transition is Kyle Gibson, the Twins first round pick last June. He was blowing through the Florida State League early in the season (4-1, 1.87 in 43 innings,33 hits, 40/12 K/BB), and the Twins logically promoted him to the Eastern League in mid-May. The results have been good but not quite the same: 3-2, 3.65 with a 31/9 K/BB in 37 innings, 35 hits. His first three starts were excellent, as he gave up just two earned runs in 21 innings, but his last three outings have been less effective, and he's given up 11 runs in his last 11 innings with slippage in all component ratios. Perhaps he's just getting a bit tired with 80 innings under his belt, but coming off his '09 injury, we will monitor this closely.

**White Sox prospect and former second-round pick Nevin Griffith got off to a good start this year and was recently named to the Carolina League All-Star Team. He's 4-2, 3.11 with a 42/27 K/BB in 64 innings and a 1.73 GO/AO ratio, and has reportedly shown good progress refining his breaking ball and changeup to go with his low-to-mid-90s power sinker. However, his last two outings have gone poorly; four walks and six hits with four runs in four innings on June 5th, followed by a horrible two-inning, seven hit, six-run blastage on June 10th. There appears to be a health problem: he just went on the disabled list.  The nature of the injury has not been disclosed. Griffith is already a Tommy John survivor, so we'll have to watch this one closely.