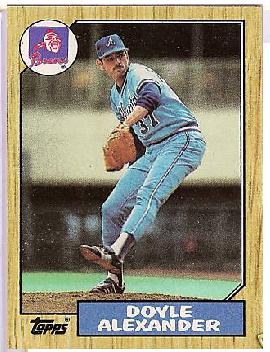 **Who is Tom Everidge, recently promoted to the majors by Oakland?

He hit .279/.346/.467 with 22 homers and 115 RBI last year for Double-A Midland, but struck out 133 times in 531 at-bats. I did see him play last year; he looked like a standard minor league slugger with a long swing, dangerous if he gets around on a mediocre fastball or hanging slider, but controllable by good pitching. 2009 has been different however: he started off .306/.380/.489 in 55 games for Midland, then went on a tear after being promoted to Sacramento: .382/.436/.636 in 43 games. The high batting average is out of context with the rest of his career, but he has reduced his strikeout rate this year, and if he can maintain that then perhaps this isn't just an age 26 fluke. He's not toolsy, but I like the fact that he's getting a shot. Let's see if he can make the most of it. He is fun to root for, but don't expect another Garrett Jones just yet.

**Quick Take on the Lee Trade: I like Knapp a lot, but he'll need at least two more years of development time and will have to prove he can stay healthy. Carrasco could be really good, but his track record is so erratic it is hard to know when/if he'll turn the potential into performance. Donald and Marson look like usable players but not stars to me. I don't love the trade for Cleveland, but I don't hate it. It all rides on if the two young pitchers develop.

**Quick Take on the Wilson/Snell Trade: I think the Mariners gave up a lot here. I know they were down on Clement, but they gave up three live arms in Adcock, Lorin, and Pribanic, in exchange for a glove-oriented shortstop and an enigmatic pitcher. That said, if you look at it within the context of swapping Betancourt for Wilson, picking up Cortes and Saito from the Royals to balance out the three arms they traded to Pittsburgh, overall I think the Mariners have done a decent upgrade here without gutting their system.

**Quick Take on Sanchez/Alderson: I understand this for both teams. The Giants need a second baseman, and while Alderson is a fine prospect, he's not Bumgarner. They've taken some hits to their system pitching depth with Alderson and Scott Barnes traded a few days ago, but that's part of what the farm system is for, to give you talent to trade. I don't have a problem with it for either team.

**I'll be posting a full report on all the traded prospects at Rotowire.com this afternoon.