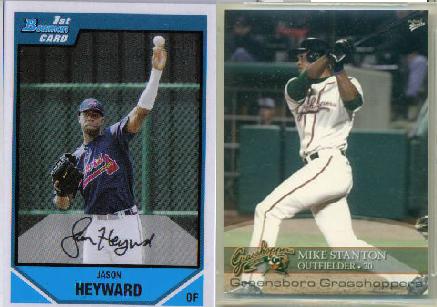 We haven't done one of these in a long time, so let's start them up again by comparing two outstanding outfield prospects: Jason Heyward of the Braves and Michael Stanton of the Marlins.

Heyward: The Braves drafted Heyward in the first round in 2007, out of high school in McDonough, Georgia. The 14th overall pick, he was well-known to scouts as an extremely toolsy outfielder with a good measure of polish, but his stock was hurt slightly on draft day because his senior year, while impressive, wasn't quite as good as people expected. He was pitched around frequently, and there was likely also an element of overexposure, as scouts had seen so much of him that they began to nitpick his flaws and not focus enough on his strengths. Even at 14th overall, he looked like an underdraft in the minds of many experts, and so far his pro career has been stellar. His work ethic and intangibles are rated very highly.

Stanton: Stanton, like Heyward, was well-known to scouts from high school days in Sherman Oaks, California. However, he was considered a rawer talent, in need of refinements to his swing and approach. That factor, plus football/baseball offers from the University of Southern California and Nevada-Las Vegas clouded his signability enough that he fell to the second round in the '07 draft. Like Heyward, Stanton is also well-regarded for his work ethic and desire to succeed.

Advantage: Heyward had a higher profile as an amateur, but both were well-known to scouts. Both have good intangibles and work ethics. I'd call this even right now.

Heyward: Heyward is 6-4, 220, a left-handed hitter and thrower, born August 9, 1989. Tools-wise, his raw power is rated as excellent and he's made strides tapping into it this year. His speed is a tick above average, and scouts like his baserunning instincts. He also features a strong throwing arm and is a sound defensive right fielder. Heyward's strike zone judgment is also very good. Physically, he's shown some vulnerability to nagging injuries and missed time with a strained hip flexor and a painful abdominal muscle earlier this year, though he's avoided any surgeries or long-term DL trips.

Stanton: Stanton is 6-5, 225, a right-handed hitter and thrower, born November 8, 1989. His best tool is power; he has even more home run potential than Heyward. He also has slightly better speed. However, his strike zone judgment is much weaker than Heyward's, and he is less impressive as a baserunner and fielder at this point. He does have a strong throwing arm, and like Heyward he projects as a right fielder down the line. He has had no physical problems of note, and has been very durable as a pro thus far.

Advantage: Both of these guys are tools hounds. Stanton's raw power is slightly better than Heyward and he taps into it more often, but Heyward uses his speed better and has stronger pure hitting skills. It's very close, but I think Stanton has a very slight edge in the pure tools department.

Heyward: Heyward is very polished for his age. He was solid last year in the South Atlantic League, posting a +23 percent OPS for Rome and hitting .323/388/.483 overall, with 15 steals in 18 attempts and a 49/74 BB/K ratio in 449 at-bats. This year, he's been even better, hitting .296/.369/.519 in 49 games for Myrtle Beach, then a stunning .400/.493/.673 in his first 16 games since being promoted to Double-A Mississippi. His tremendous 10/4 BB/K in his first 55 at-bats at that level demonstrates his excellent feel for hitting. He's now 20-for-24 as a career basestealer, and scouts continue to praise his defense and baserunning instincts. The one knock they had on him entering '09 was home run power, as he hit just 11 last year in 127 games. He's already hit 11 this year in 65 games, while maintaining his batting average and OBP skills.

Stanton: Stanton slammed 39 homers last year in the Sally League, hitting .293/.381/.611 for Greensboro and posting a stunning +40 percent OPS in the same league as Heyward. On the other hand, his BB/K ratio was much less impressive at 58/153 in 468 at-bats, leading to concerns that he'd have contact problems against better pitching. He maintained his production this year in the Florida State League, hitting .294/.390/.578 in 50 games for Jupiter, but has been less effective since moving up to Double-A, hitting .252/.337/.478 for Jacksonville. Granted, that's still solid performance for a 19 year old in Double-A, and he's combined overall this year for another 20 homers.

Advantage: Although Stanton has more home run power at this point, Heyward has superior plate discipline, much better contact rates, and is a more polished runner and fielder according to scouts. He has the edge here, though Stanton has made progress.

Heyward: In terms of his ultimate ceiling, scouts compare him to players like Dave Parker, Billy Williams, or a Fred McGriff who can play right field, if he develops more power at the expense of batting average.

Stanton: Possible comparisons for his future would be players such as Dave Winfield (with a higher strikeout rate), Jim Rice, or perhaps an Andres Galarraga who can play right field.

Advantage: Both players have the latent ability to be consistent All Stars if they develop their skills to their maximum potential, though the shape of their success will likely differ. Heyward is likely to have a better batting average and on-base percentage. Stanton will likely hit more home runs, but his problems with contact could hurt his batting average and OBP. Both of them are young enough to develop considerably beyond where they currently are. Personally, I think Heyward has a broader skill base and I prefer that sort of player.

Summary: It's close. I rate them even in terms of intangibles. Stanton has a slight edge on tools, Heyward has the edge in current broad-based skills. Stanton is a few months younger, but I prefer Heyward and his much lower strikeout rate as a slightly better prospect, getting a pure Grade A from me with Stanton as an A-