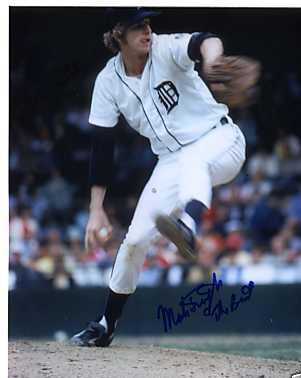 Mark Fidrych was drafted by the Tigers in the 10th round in 1974, out of high school in Worcester, Massachusetts. Tall and skinny, he did well in rookie ball, with a 2.38 ERA and a 40/16 K/BB in 34 innings for Bristol in the Appalachian League.

Fidrych unexpectedly earned his way onto the major league staff for the Bicentennial season. He began in the bullpen, but moved to the rotation in May, quickly becoming a national sensation. He went 19-9, 2.34 with a 97/53 K/BB in 250 inning, 217 hits allowed, making 29 starts and two relief appearances. He completed 24 games. . .no one thought much about pitch counts then. His stuff wasn't spectacular. . .sinker, slider, changeup. . . but he got tons of ground balls, threw strikes, and entranced fans with his unique combination of goofiness and fearlessness on the mound, earning Rookie of the Year. Wherever he pitched, fans turned out and owners rejoiced.

He began 1977 on the disabled list with a knee injury. He came back in May and pitched well for awhile, going 6-4, 2.89 with a 42/12 K/BB in 81 innings with 82 hits allowed in 11 starts, with seven complete games. But the magic didn't last: his shoulder began to hurt, and he was sidelined in the second half. Sports medicine was comparatively primitive back then: the injury was never properly treated or even diagnosed.

He was limited to just three starts in 1978, winning and completing two of them, an irresponsible move by the Tigers considering the injury problems. His arm still dead, he made just four starts in '79, going 0-3, 10.44.

The Tigers sent him back to Triple-A for most of 1980. He went 6-7, 3.92 with a 62/54 K/BB in 117 innings, with 123 hits allowed. He did make nine starts for the Tigers, going 2-3, 5.68 with a 16/20 K/BB. Despite his best efforts, it was clear that he was finished as a major league pitcher. His stuff was gone, and his command wasn't good enough to compensate. He pitched in Triple-A from 1981 through 1983, performing poorly, until finally retiring. It wasn't until 1985 that his shoulder problem was formally diagnosed as a torn rotator cuff, far too late to do any good.

From a baseball perspective, it's easy (and likely accurate) to blame his early burnout on his huge workload as a rookie, which was reckless even by 1976 standards. However, even if he had been used more wisely, his component ratios were not those of a pitcher destined to have a long career. His strikeout rate was quite low even for a ground ball pitcher, and there always seemed to be a "bottled lightning" quality to Fidrych.

The mystique was something special though, and even after his injuries the echo of that remained. I was just becoming a baseball fan in 1976, and the excitement of Fidych was part of the appeal for an eight-year old. In 1980, when he was pitching for Triple-A Evansville, I got his autograph on my baseball glove before he took the mound one night against the Iowa Oaks. He spoke with my friend Brent and I outside the clubhouse, and gave autographs and friendly smiles to all comers. I'll always associate Mark Fidrych with my earliest, innocent memories of the game.