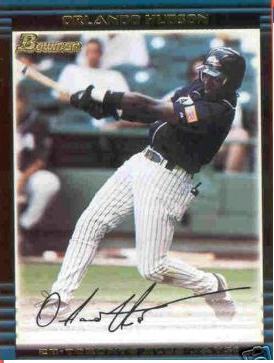 Following up with another player who was a pleasant surprise, we have Orlando Hudson, currently awaiting his fate on the free agent market.

Orlando Hudson was drafted by the Toronto Blue Jays in the 43rd round in 1997, out of Spartanburg Methodist Junior College in South Carolina. He signed as a draft-and-follow in the spring of 1998, then went to Medicine Hat in the Pioneer League, where he hit .293/.366/.475 in 65 games. I did not write about many short-season players back then, but I would rate a similar player as a Grade C or C+ nowadays: good early performance, but without a big draft pedigree and needing to see more at higher levels.

Hudson moved to Hagerstown in the Sally League in 1999 and had a fair year, hitting .267/.322/.402, not particularly strong but not horrible. His walk rate was mediocre, but he showed some pop with 36 doubles. He played third base and outfield, but without really showing the bat for either position, and scouts were rather blasé about his tools. I didn't put him in the 2000 book but he would have rated as a Grade C prospect.

Promoted to Dunedin in the Florida State League in 2000, Hudson hit .285/.354/.399 in 96 games, then .239/.320/.358 in 39 games for Double-A Tennessee. He lowered his strikeout rate, but the bat was still mediocre. On the other hand, his defense and his work ethic were getting noticed, and I put him in the 2001 book as a Grade C prospect, writing that Hudson "is right on the threshold of either turning into a genuine prospect or slipping into organization player status."

He is entering his decline years now. Second baseman sometimes fall apart physically with little or no warning, and he's had durability issues the last two years. Hitting in Arizona boosted his numbers, and in a different environment his production could go back to Toronto-level numbers. On the other hand, the glove is still very strong, so I think his future depends on if he can hold up physically. He's been a very solid player, and has certainly turned out to be a damn nice pick in the 43rd round. He never got much praise for tools, but scouts did respect him for his work ethic and polish.