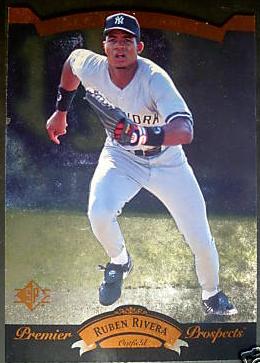 1) Jesus Montero, C, Grade B+: I believe in the bat. Where he fits with the glove I don’t know.

2) Austin Jackson, OF, Grade B: Should be a solid player but not a star. Will that be enough in ?

4) Austin Romine, C, Grade B-: More likely to stick behind the plate than Montero, though not as good a hitter.

5) Zach McAllister, RHP, Grade B-: A favorite of mine heading into 2008, looks like a strong inning-eater type.

6) Mark Melancon, RHP, Grade B-: Almost ready for major league action, should be good in pen and has closer potential.

7) Jairo Heredia, RHP, Grade B-: Looks like a major sleeper to me, and this is an aggressive ranking.

8) Andrew Brackman, RHP, Grade C+: Yankees propaganda is thick around this guy. Great arm, healthy now, but I don’t buy into the command yet. Want to see evidence.

9) Phil Coke, LHP, Grade C+: I like what he did a lot last year. Should be a very useful pitcher.

10) Alfredo Aceves, RHP, Grade C+: Has reached his ceiling, but like Coke he should be useful

14) David Robertson, RHP, Grade C+: Yet another pen arm. ERA should have been closer to 4.00 based on the components. Hasn’t pitched 50 innings yet so he qualifies.

15) Brad Suttle, 3B, Grade C+: Will need to show enough power for third base.

16) Arodys Vizcaino, RHP, Grade C+: Very young, could rank in the top 10 next year if he develops properly.

20) Eduardo Sosa, OF, Grade C+: Very high ceiling guy, but need some North American data. Could rank as high as 8 depending on criteria and how much you trust DSL performance.

The Yankees don’t have anyone in the system that is a sure-fire superstar right now, but there is a lot of material to work with here on the pitching side. I love Montero’s bat, but defensive questions prevent a higher grade at this time. He has star offensive potential, but where does he play? Jackson looks more like a solid player than a star. Both Romine and Suttle have major league potential but some questions they need to answer at this point. Young tools guys like Sosa and De Leon look promising but are so far away that they are hard to rank at this point.

Things look much better on the pitching side. Brackman has a high ceiling obviously, but I find the hype about him highly annoying and, more importantly, very misleading. He is extremely raw for a college pitcher and until he actually takes the field in full-season ball and throws some strikes, I am keeping expectations in check. I like the guys ahead of him better at this point, particularly McAllister and Heredia. Coke and Aceves don’t have huge ceilings, but both look like useful major league pitchers. There are a LOT of power bullpen arms available.

Overall, this system needs hitters but has considerable depth in pitching, giving them a lot to work with on the trade market. They are putting more and more money into , and a less conservative approach in the draft should pay dividends.