As you likely know, the St. Louis Cardinals signed veteran catcher A.J. Pierzynski Friday night, a few days after he was released by the Boston Red Sox. Pierzynski has had a long and somewhat controversial career. He was also a controversial prospect back in the day, so this seems like a great time do work up a Prospect Retrospective for him.

Pierzynski was drafted by the Minnesota Twins in the third round in 1994, out of high school in Orlando, Florida. He showed good contact hitting skills in rookie ball, hitting .289 with just 19 strikeouts in 152 at-bats. His power was unimpressive, but he was just 17 years old and was well-regarded defensively. At this point he would be a Grade C+ prospect with higher potential.

For Elizabethton in the Appy League in 1995, Pierzynski hit .332/.373/.507, very strong hitting performance obviously. He also hit .310/.322/.464 in a 22-game trial for Fort Wayne in the Midwest League. His power looked like it was developing. Although his walk rate was low, his strikeout rate was also low. I didn't write about many short-season players in my first Minor League Scouting Notebook for STATS in '96, but nowadays Pierzynski would have rated something like a Grade B- or maybe a Grade B depending on the exact reports. 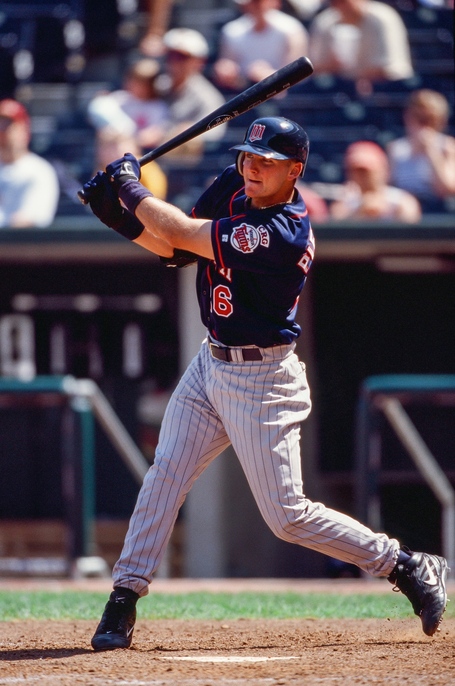 A much younger A.J. Pierzynski, via Getty Images

Promoted to Fort Wayne for 1996, Pierzynski hit .274/.308/.406 in 114 games. His defense was impressive, but his overall offensive production wasn't particularly hot, hampered by shaky plate discipline. His strikeout rate was low, a good marker, but his walk rate was also low, hurting his OBP and making him very dependent on his batting average for productivity. This is the pattern he would show for the rest of his career. I gave him a Grade B- in the 1997 book.

On to Fort Myers in the Florida State League for 1997. Pierzynski's '97 performance was similar to his `96: .279/.313/.405, not impressive in raw numbers but Fort Myers is a hard place to hit. His defense slipped a bit according to reports and there were rumbles about makeup concerns. I dropped him to Grade C+.

Pierzynski refined his footwork in 1998, restoring his defensive reputation. He hit .297 in 59 games at Double-A New Britain, albeit without power (.392 SLG) and a very low walk rate. Promoted to Salt Lake City at mid-season, he hit just .255/.284/.409 there, very poor numbers considering the park and league context. But his glovework was impressive, and he got a cup-of-coffee in Minnesota. I gave him another Grade C+, concerned that he was stagnating offensively but thinking that the defense could keep him employed for awhile.

1999 was a bad season. A broken hamate bone cost him half the campaign, and even when he was healthy he hit quite poorly, just .259/.307/.316 for Salt Lake, awful numbers for the Pacific Coast League context even accounting for injury. His defense remained good, but at this point he had shown no offensive growth since A-ball, and I was quite skeptical about his ability to be a regular. I gave him a Grade C in the '00 book and felt he was a role player at best.

2000 was a three-way split, time spent at New Britain, Salt Lake, and Minnesota. His bat came alive, Pierzynski hitting well at all three levels including a .307/.354/.455 mark in 33 games for the Twins. I was still somewhat skeptical, raising his grade back to C+ but believing that the improvement with his hitting was possibly illusionary.

But that's not what happened. Pierzynski hit .289/.322/.441 in 2001, then .300/.334/.439 in 2002. Eventually traded to the San Francisco Giants and replaced with Joe Mauer, he held down a regular major league catching job with the Giants, Chicago White Sox, and Texas Rangers for more than a decade. Although never an elite hitter, he was extremely durable, extremely consistent, and didn't truly start to show his age until this year at 37.

Analytically, Pierzynski's hitting style in the majors (moderate power with low strikeouts but also a low walk rate limiting his OBP) was very similar to what he did in the minors. I think the offensive expectations were correct: he turned into the hitter we thought he'd be.

However, he proved unusually durable and skilled enough as a defender to hold his job despite the hitting weaknesses and clubhouse issues. All things considered, Pierzynski turned out better than expected.