The Negro Leagues Baseball Museum, working with the Great Plains Black History Museum, is showing two exhibits at the CWS that showcase players who deserve to be remembered.

As College World Series (CWS) fans stroll the perimeter outside TD Ameritrade Park in Omaha and enter Baseball Village located just south of the stadium, they encounter many great entertainment opportunities, but none as important as the two traveling exhibits sponsored by the Negro Leagues Baseball Museum in Kansas City.

One exhibit, "Times, Teams & Talent," showcases the history of the Negro Leagues through stories and photos as well as facts about the various teams. It includes a list of 116 "barrier breakers" – African-American and Latino players who "endured the grueling process of integrating Major League and Minor League baseball organizations throughout North America" as well as a photo of Branch Rickey signing Jackie Robinson. 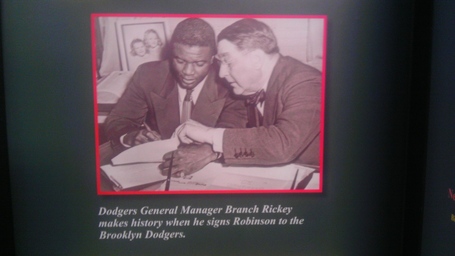 The other exhibit, "They Were All Stars," includes 24 large panels of Negro League players who went on to become Major League All-Stars. Each panel is packed full of facts and statistics about each player. 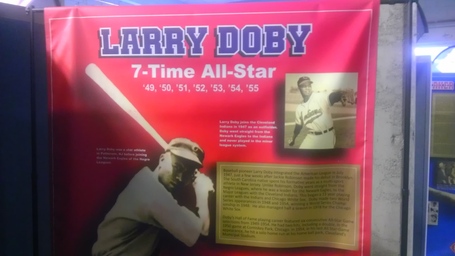 The Great Plains Black History Museum (GPBHM) in Omaha is facilitating the exhibits at the CWS. I had a chance to talk to GPBHM chairman and president Jim Beatty today at TD Ameritrade Park about how fans are receiving the exhibits and about the content of those exhibits.

"We estimate about 75 or 80% of our visitors are from out of town," Beatty said. The exhibits opened to the public on Friday and about 400 people streamed through. "After they have visited, many have stopped and said, ‘Thanks for bringing it. I didn’t realize some of the history.’ Some mentioned they have been to the Negro Leagues Baseball Museum in Kansas City. And all have been very, very supportive."

After becoming engrossed in the history, some even had stories of their own to share.

A couple of men who had just stopped to view the Robinson display told Beatty about a news story they heard about a woman named Sue McEntee in Des Moines who recently nearly sold a baseball bat at a garage sale that is believed to have once been owned by Robinson. Her asking price was one dollar. She had no idea it probably once belonged to Robinson, but an honest potential customer, Bruce Scapecchi, pointed it out to her. Her kids have grown up playing with the bat in the family’s back yard.

Turns out that her uncle was a left-handed pitcher named Joe Hatten and he played for the Brooklyn Dodgers when Robinson was on the team. He must have acquired the bat at some point and it ended up in McEntee’s household. Needless to say, McEntee pulled the bat out of the garage sale and plans to keep it. It sounds like the bat will still need to be authenticated, but if it turns out to be the real deal, Beatty is planning to contact her to see if she will allow the museum to show the bat.

Speaking of stories, Beatty told me about a boy who stopped by the exhibit. He said the boy was maybe 10 years old, sporting a Mohawk and a temporary LSU tattoo on the side of his head. Beatty was struck by the way the boy appeared to be looking up into the eyes of Robinson's photo, as if he were talking to him. And in a way, the picture Beatty snapped of the boy doing so really might be worth a thousand words. At the very least, it shows how the exhibit can bridge the generations.

Robinson’s legacy has a way of doing that. The movie "42" has stirred up interest in Robinson and the Negro Leagues in general.

"Everyone coming in, especially the kids, the first thing they ask about is Jackie Robinson," Beatty said. "So we point them to the display. The movie has been a huge plus in terms of increasing awareness of not only Jackie Robinson, but also the courage of many – not the least of whom was Branch Rickey – in order to make that happen."

As time passes, some of the names of the players in the Negro Leagues are slipping from our collective consciousness and many young people may have never heard of some of these players, making exhibits like these even more important.

"We’ve got to continue to tell their stories," Beatty said. "Once people view these exhibits it piques their interest and they want to know more."

The exhibits will be on display through June 30 in Baseball Village from 10:00 a.m. to 8:00 p.m., seven days a week. Photos are welcome and admission is free. Donations are accepted to help offset the expenses of the exhibit and to help further the educational opportunities the museum offers.