The statheads vs. traditionalists conflict has been going on in one form another for 30 years, though it accelerated after Moneyball. As many people have pointed out, the dichotomy between the two stances is overblown, but the dispute keeps simmering. Earlier this spring we had Hawk Harrelson vs. Brian Kenny. Then we had Mariners manager Eric Wedge blaming sabermetrics for the struggles of demoted second baseman and possibly-failed prospect Dustin Ackley.

The argument is wearisome at this point. It seems to me that both sides are talking past each other. Today I'd like to present something of a roadmap to hopefully move things forward.

This is based on ideas laid out by philosopher Ken Wilber, a founder of Integral Theory. Wilber doesn't write about sports (except in the sense that sports are part of the universe and he writes about the universe), but I've found some of his ideas useful in helping me organize my thinking about many things, including baseball. Be warned that Wilber writes a lot about spirituality and that might not be to everyone's taste. However, the esoteric stuff has nothing to do with what I'm getting at, so bear with me on this.

Wilber's basic ideas are too involved to lay out in detail here, but some introduction is necessary. This June 2012 article by Mark Manson is a good primer for Wilber's concepts and presents both his strengths and weaknesses as a thinker. More details about Wilber's work can be found here. Cribbing and paraphrasing from Manson, here are some basic beginning principles:

A) Few ideas, or people, are 100% right or 100% wrong. They merely vary in their degree of incompleteness.

B) Leaps in evolution or and gains in knowledge usually occur by "transcending and including" previous data or ideas, not by completely wiping out what came before. In biological evolution, for example, the development of the single-celled organism did not eliminate molecules or atoms, but included them in a greater order of complexity. According to Wilber, this pattern occurs in all phenomena, including the development of human knowledge. Rational thought does not exclude emotion, for example, but should include it as part of a greater developmental level of consciousness.

C) Knowledge generally advances by including and integrating what came before into something greater.

D) Perception contains and includes both interior and exterior modalities. Let's say I show you a picture of an attractive woman. Then I cut your brain open and track the neurons firing while you think about the woman. Which is real, the neuron firing observed by exterior observers? Or your internal experience of thinking about the hot woman?

While a biological reductionist might say that the only thing that matters is the neuron firing, the person thinking the thought would likely disagree. In human experience, both are real in their own way.

Now, what does all of this have to do with baseball? Stay with me and you'll see in a moment.

Wilber presents a model of knowledge called All Quadrants All Levels. Quoting from Wilber,

"What if we attempted. . .to use all of the world's great traditions to create a composite map, a comprehensive map, an all-inclusive or integral map that included the best elements of all of them?"

This essay by Eric Thompson delves into this aspect of Wilber's philosophy. Wilber attempts to map human experience with four quadrants of thought.

***The upper-left quadrant deals with interior, individual, subjective experiences: feelings and thoughts and emotions as experienced by individuals. This is the Individual Subjective realm.

***The upper-right quadrant deals with exterior, individual, objective experiences, things that have to do with the material body and can be measured scientifcally. This is the Individual Objective realm.

***The lower-right quadrant deals with exterior, group-oriented, objective experiences. This would include things like economics and quantitative social science or historical study, and some forms of sociology. This is the Collective Objective realm.

You can draw a map. 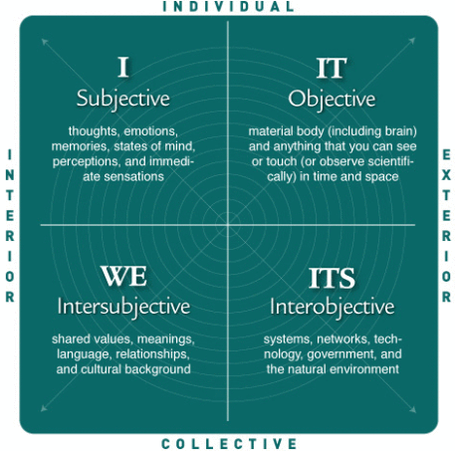 Note that these areas can overlap and that all of us operate in all of these quadrants, as individuals and groups. All quadrants are interrelated, and (according to Wilber and his followers anyway) any good system of knowledge has to account for human experience at all these levels.

So where's the baseball?

Well let's take the different forms of baseball knowledge that are out there and place them in these quadrants.

***The upper-left quadrant, Individual Subjective: In baseball terms, this is where player psychological makeup comes in: the interior experience of the player, his work ethic, instincts, feel for the game, level of confidence, intelligence, maturity. When a baseball person talks about the importance of personality and makeup, he's looking at baseball from this point of view.

***The upper-right quadrant, Individual Objective: This is the physicality of baseball: pitcher mechanics, a hitter's swing, fielding footwork, how to run the bases, how to throw, the mechanics of the game. When a scout breaks down a hitter's swing or a pitching coach works with a pitcher on his mechanics, they are looking at the game from this point of view. Sabermetric studies of individual players also come in here.

***The lower-left quadrant, Collective Subjective: In baseball terms, this is where clubhouse chemistry and organizational culture comes in. When baseball people talk about a bad clubhouse (or a good one) or a team that lacks (or has) clubhouse leaders, they are looking at it from this point of view.

***The lower-right quadrant, Collective Objective: This is where team sabermetrics come in. Most knowledge advancement in baseball has occurred in this quadrant over the last 25 years.

Again, these things can overlap and influence one another. A player's subjective experiences can certainly impact his objective performance and vice versa.

Now, with this in mind, let's say your team sucks and you are trying to figure out why.

Grumpy Ancient TV Commentator says your team sucks because the clubhouse is toxic. He talks about the importance of team chemistry. In so doing, he is describing the emotional experience of the clubhouse and is looking at the problem from a collective subjective viewpoint. Perhaps he is drawing on his own experience as a former player.

Smarty Stathead says your team sucks because the on-base percentage is too low. In so doing, he is looking at and measuring the problem from a quantitative, collective objective lower-right viewpoint.

Smarty Stathead is correct. . .the OBP is too low. . .but that doesn't mean that the Grumpy Ancient TV Commentator coming from the lower-left quadrant is necessarily wrong. They can both be right and are describing something real.

On the upper side of the map, Grizzled Old Scout says that your right fielder sucks because he is lazy and immature, or lacks instincts, or his confidence isn't very good. He's looking at it from the upper left, individual subjective viewpoint and focusing on the interior experience of the individual player.

Coachy Coach, looking at the problem from the upper right and the individual objective view, believes that the problem can be fixed with a tweak to the right fielder's hitting mechanics. Meanwhile, Smarty Stathead, also looking at the issue from further to the upper right individual objective but using quantitative descriptive methods, points out that the sucky right fielder is hitting .097 when down in the count 0-2 and that his Pitch f/x data shows he can't handle anything on the outer half.

So who is right? Well, they all are, or at least they are all describing part of the truth. Grumpy TV Commentator, Smarty Stathead, Grizzled Scout, and Coachy Coach are all describing something real, just from a different area on the map. The fact that the individual objective quadrant exists does not mean that the individual subjective quadrant, or any of the other quadrants, does not also exist.

It is true that some arguments within each quadrant are better than others. Modern physics, for example, describes the physical workings of the universe in a more accurate way than the physics of the 15th century. In baseball terms, we know far more about the individual objective and collective objective realms than we did 20 years ago, thanks to the advances in sabermetics. Our understandings within each quadrant are richer and deeper than they once were, and our knowledge of how the various quadrants interact is also deeper than it once was.

So why all the arguing?

I think the problem comes when people get locked into one way of viewing an issue and assume that people looking at the problem from a different quadrant are wrong or stupid. We are all human; all of us are better at viewing problems from certain angles than others. Wisdom is being able to understand the best arguments from all quadrants and finding a way to incorporate them in a larger view, or at least appreciate them.

Most people know the "stathead vs. traditionalist" argument is simplistic and I think most people have an intuitive understanding of what these maps are trying to point out. There is also a large component that I haven't addressed yet, namely how hierarchies of knowledge incorporate and supersede (not necessarily destroy, although sometimes they do) earlier viewpoints.

But that's for a different day.