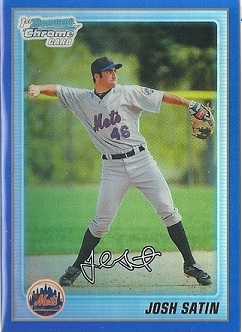 What do you call a guy with a career minor league line of .309/.399/.473, including .347/.410/.453 in Triple-A? According to many scouts, you would call him "not a prospect." You won't find his name on many prospect lists, at least pre-season ones, but New York Mets farmhand Josh Satin is ripping up Triple-A and has little left to prove in the minors.

Due to an injury redshirt season, Josh Satin played baseball for five years at the University of California, four of them as a starter. His best year was his last one: a .379/.500/.723, 18-homer monster season in 2008. The catch was his age: he was already 23 years old. Scouts weren't wild about his physical tools, but he had performed well with wooden bats in summer ball, and his overall college performance was good enough that the Mets drafted him in the sixth round. This was also a budget pick: he cost just $25,000 to sign since he had no bargaining power.

Satin got his career off to a decent start by hitting .280/.350/.462 for Brooklyn in the New York-Penn League after signing. He followed that up with a .284/.385/.418 mark for Low-A Savannah in 2009, hitting 38 doubles and drawing 73 walks. However, he was old for the Sally League at age 24, and the general opinion among scouts was that he was an older college guy ripping up inexperienced pitching.

So, what gives? Why haven't scouts given Satin his due?

There are several reasons. He's a 6-2, 200 pound right-handed hitter, 26 years old, so he doesn't have classic age projection. His physical tools are nothing special, average to below average. He lacks speed. His body looks like a third baseman's, but he's spent the majority of his time at second base. He does have some experience at third base, but his arm is limited for the position and he lacks the range for shortstop.

At second base, he avoids mistakes and doesn't make many errors, but his range is mediocre at best. The Mets have groomed him as a utility player, and he's seen playing time at second, third, and first base this year. He's not great anywhere, but versatility is an asset in itself.

Satin's offensive numbers are quite good, obviously. He's hit at every level, has doubles power with occasional home run pop, and controls the strike zone well. There are a lot of moving parts in his swing which turns some scouts off, but minor league pitchers have been unable to exploit this or find consistent holes in his approach. He's considered highly intelligent and works hard at his game.

Satin has nothing left to prove in the minors. The Mets seem willing to give him a shot in the majors, at least if Farm Director Paul DePodesta's recent comments are any indication.

I would love to see what Satin could do with 500 major league at-bats. I'm not sure how he will get them, but he deserves a look as a bench player at least.