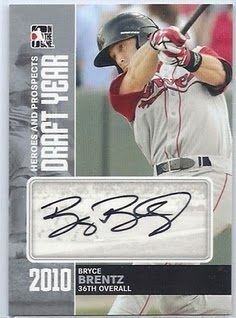 Bryce Brentz was a Boston Red Sox first round draft pick in 2010 out of Middle Tennessee State University. In 2009, he hit .465 leading all of Division 1 baseball. His success did not translate to pro ball in his first season. He hit just .198/.259/.340 in 286 plate appearances for short-season Lowell in the New York-Penn League. However, there were extenuating circumstances, namely an ankle injury and a difficult time adjusting to new contact lenses.

This season has been a different story, and he has been rewarded by being promoted to High Class A. He hit .359/.414/.647 with 11 homers in 170 at-bats for Low-A Greenville, with a 14/35 BB/K ratio. Since moving up to Salem, he is 8-for-28 (.286) with three homers in his first seven games, with seven strikeouts and no walks. He was promoted in late May, but spent two weeks on the disabled list with a wrist injury before being activated last week.

What is this prospect's future? Does he have one in Boston?

Despite his struggles last year, Brentz was promoted to the Greenville Drive this spring and dominated. With 14 home runs, he leads the Red Sox system and has fully re-established himself as a power hitting prospect. All his numbers at Greenville saw a dramatic leap, including his OBP at .414 compared to .259 at Lowell. Scouts have questioned his eye at the plate but even that seems to be becoming less of an issue, or at least it did before he moved up to Salem. He’s had some issues with the strike zone there but the sample is small so far and the wrist injury may be a factor, although it hasn't prevented him from being the power forward to High-A.

Scouts report that Brentz has a very quick bat and explosive raw power. His quick hands allow a fast swing. He sometimes has the tendency to try to pull everything, but when he is going well he will hit the ball to all fields. He worked hard to improve his hitting approach in instructional league, focusing on strike zone judgment and showing less movement at the plate.

In the field he has a strong arm and projects as an above-average right fielder with average speed. He struggles on getting good jumps but this has improved over the last year.

Brentz has had a roller coaster of a time in the minors thus far, going from top draft pick to struggling minor leaguer and back to a top prospect. It should be interesting to watch the process Brentz faces in Salem, and we will monitor his progress.