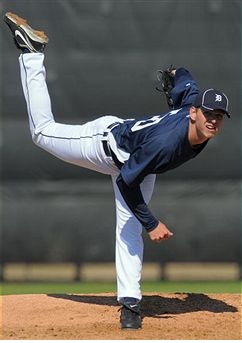 Two years ago, the Tigers drafted Jacob Turner with the ninth-overall pick in the first round. The right-hander out of high school in St. Louis, Missouri, was rated as the top prep pitching prospect in the 2009 draft by most experts. He's developing rapidly and likely within a year of making his major league debut.

Turner signed a contract with $5.5 million dollars; it was a big-league contract which means he's already using up his 40-man roster options, but his development has been quick enough that it isn't a concern. A 6-5, 210 pounder, Turner works at 92-94 MPH and can bump that up to 95-96 he uses his four-seam fastball. His curveball and changeup needed work when he was drafted, but his progress with both pitches has been excellent. He is a pitcher, not a thrower, and has strong mound presence and emotional maturity. Although his mechanics are clean and he's a good athlete, he's had some minor injuries, including bouts of shoulder (2009) and elbow (2010) soreness. The Tigers shut him down immediately both times at the first sign of trouble, and he's been fully healthy this year. They are pushing his pitch counts up gradually and he's throwing more innings-per-start this year.

Although lack of run support has given him just a 1-1 record in 11 starts for Double-A Erie, his other numbers are much better, with a 3.05 ERA and a 61/18 K/BB in 74 innings with just 62 hits allowed. He's been especially effective against left-handed hitters, holding them to a mere .179 average this year.

Turner could finish 2011 in Triple-A, and is expected to challenge for a rotation spot in 2012. He's developing exactly as the Tigers hoped he would. Barring a serious injury or sudden loss of command, he has a shot at being a number one or two starter.