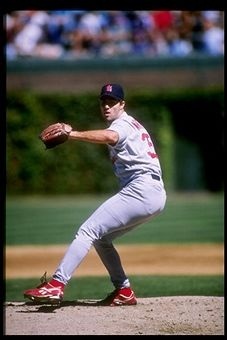 Matt Morris was drafted in the first round by the St. Louis Cardinals in 1995, out of Seton Hall University. The 12th-overall pick in the draft, he drew Jim Palmer comparisons due to his size, mechanics, and quality fastball. His performance in college was inconsistent and he was supposed to be somewhat raw, but his upside was obvious.

He was the third college pitcher drafted that year, after Jonathan Johnson of Florida State (seventh overall, Texas) and Mike Drumright of Wichita State (11th overall, Detroit). Morris performed well in his pro debut, posting a 2.38 ERA with a 31/11 K/BB in 34 innings in the Florida State League for St. Petersburg, showing more polish than anticipated. I didn't give letter grades to draftees back then, but in retrospect a similar guy now would probably get a Grade B from me.

Invited to major league spring training as a courtesy in 1996, he was so impressive that he almost made the big league rotation. The Cardinals opted for wisdom and sent Morris to Double-A Arkansas instead, where he went 12-12, 3.88 with a 120/48 K/BB in 167 innings, with 178 hits allowed. Scouting reports were strong, pointing to a consistent 92-95 MPH fastball, along with an above-average curve and rapidly improving changeup. I wrote that he probably could use some Triple-A time to polish his command within the strike zone, but I gave him a Grade B+ and ranked him as the Number Seven pitching prospect in baseball.

Most Similar Pitchers: Tom Browning, John Lackey, Brad Penny, Shane Reynolds, Jack McDowell, John Smiley, Mark Portugal, Alex Fernandez, Dick Donovan, and Denny Neagle. All of those guys were fine pitchers, if lacking durability past the age of 30. We'll have to see what happens with Lackey.

At his peak, Morris was one of the best pitchers in baseball, but his body couldn't sustain dominance past the age of 28, and by the end he was surviving with mirrors and moxy. Although the Jim Palmer comps he got in college didn't pan out, he was a very good pitcher.