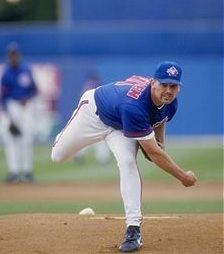 Per reader request, here is a Career Profile for Pat Hentgen. I'm not sure if there is a conspiracy among Blue Jay fans to ask about players from their late 80s and early 90s farm system, but he is an unusual case.

Pat Hentgen was drafted by the Toronto Blue Jays in the fifth round in 1986, from high school in Fraser, Michigan. He wasn't a huge guy at 6-2, 180, but he was a good athlete with a live arm. He was sent to St. Catherine's in the New York-Penn League (at age 17) and posted a 4.50 ERA with a 30/30 K/BB in 40 innings. His control obviously needed a lot of work, but he was young for the NY-P. I'd give a similar raw high school arm a Grade C "with higher potential" rating nowadays.

Hentgen went to Myrtle Beach in the South Atlantic League in 1987, going 11-5, 2.35 with a 131/60 K/BB in 188 innings, 145 hits allowed. 188 innings in 31 starts. . .what would people say about such a workload for an 18-year-old today? Hentgen was showing an above-average fastball and a good curve. He'd likely rate as a Grade B- or maybe a Grade B prospect with workload worries under today's conditions.

Returning to Dunedin for 1989, Hentgen improved to 9-8, 2.68 in 28 starts with a 148/71 K/BB in 151 innings, 123 hits. He boosted his K/IP and improved his H/IP, but his walk rate remained higher than ideal. He had the look of a potential workhorse starter but not a future ace, and pending Double-A performance there wouldn't have been a change in his grade.

Hentgen moved to Double-A for 1990 and went 9-5, 3.05 with a 142/68 K/BB in 153 innings over 26 starts, his numbers remaining steady from what he was doing  in A-ball. He did well but wasn't considered a hot prospect, not making the Baseball America league list for example and still showing some command issues. I think he'd remain a B-/C+ type.

Promoted to Triple-A for 1991, he posted a 4.47 ERA in 28 starts for Syracuse, with a 155/90 K/BB in 171 innings, 146 hits. He pitched seven innings for the Blue Jays in September, with a 3/3 K/BB and five hits allowed. Again, he didn't make any hot prospect lists, and looked like a possible fourth starter or relief type, with command (note the high walk rate at Syracuse) being the biggest problem. I'd have rated him still on the C+/B- boundary.

Most comparable pitchers: Jon Garland, Todd Stottlemyre, Woody Williams, Mike Boddicker, Charles Nagy, Darryl Kile, Dan Petry, Dick Ruthven, Milt Wilcox, and Ken Hill.  All solid pitchers, inning-eater types, just like Hentgen.
As a prospect, Hentgen was marked by a big workload (by today's standards especially) and some command problems, and moving one level at a time through the Toronto system, being young for his leagues at first.