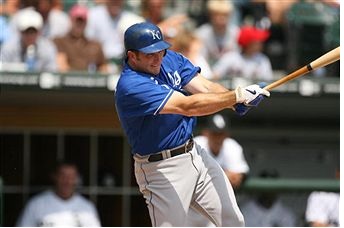 With the retirement of Mike Sweeney, it's a good time to do a Career Profile for the former Kansas City Royals star.

Mike Sweeney was drafted by the Kansas City Royals in the 10th round in the 1991 draft, out of high school in Ontario, California. As a rookie catcher in the Gulf Coast League, he hit just .216 in 38 games with a .272 SLG. At this point, he would have rated as a Grade C or C- prospect, just a young, strong but raw kid who may or may not develop.

Moving up to short-season ball in '92, Sweeney hit .221 for Eugene in the Northwest League. His plate discipline was poor (13 walks, 54 strikeouts), and there was no reason to believe he would develop. His defense behind the plate was very raw: he made 14 errors in just 44 games. A retrospective prospect grade would be C-; there was no reason to think he would develop at this point, but given his age it was too soon to give up.

Sweeney returned to Eugene in '93, hitting .240 in 53 games. But there were signs of improvement. He boosted his SLG to .423, and drew a lot more walks, 30 compared to 41 strikeouts. The improvement in his plate discipline was quite notable, and would have been enough to boost his grade to C. His defense improved slightly as well: he still coughed up too many passed balls, but at least his error rate declined.

In the Midwest League in '94, Sweeney hit .301 with a .504 SLG for Rockford, hitting 10 homers and drawing 55 walks in 86 games. His power was clearly developing, and for the second year in a row he made major strides with his strike zone judgment, increasing his walk rate while reducing his strikeouts. He took a big leap forward with the glove, throwing out 42% of runners and reducing his error and passed ball rates. A retrospective grade would be C+.

For Wilmington in the Carolina League in '95, Sweeney hit .310 with 18 homers and 60 walks (just 39 strikeouts) in 99 games. These are good numbers, but they are even better than they look on the surface: Wilmington was an extreme pitcher's park. 16 of Sweeney's 18 home runs came on the road. Once again, he cut his strikeout rate, and continued to make steady progress on defense. I gave him a strong Grade A- in my 1996 book, and rated him as the number 16 prospect in all of baseball. Baseball America didn't have him in the top 100.

While scouts respected Sweeney's bat in the minors, they were never wild about his physical tools or his defense behind the plate. Indeed, he didn't thrive offensively in the majors until being moved to first base. But in this case, statistical analysis pointed Sweeney out as an elite hitting prospect as early as 1996, much earlier than traditionalist views. Even as early as 1993-94, his dramatically improving plate discipline was a marker of a bright future.