Which Prospects Can Return the Orioles System to its Pre-2010 Status?

Share All sharing options for: Which Prospects Can Return the Orioles System to its Pre-2010 Status? 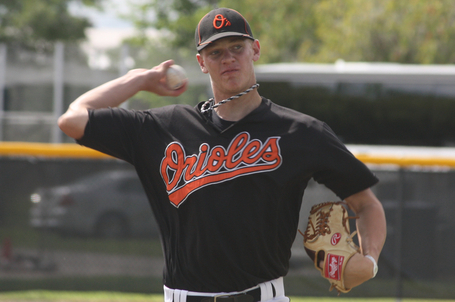 The Orioles, considered a top 10 farm system by most analysts as recently as 2010, now find themselves as a consensus bottom 10 system. Whether you want to blame this on the recent graduations of players like Brian Matusz, Jake Arrieta or Josh Bell, the large amount of injuries throughout the system or bad luck; whatever it is, the bottom line is the amount of talent in the O's minors is nowhere close to that of any of their AL East competitors.

While no one is expecting a minor league breakout like the Royals had, there is enough potential within the O’s system to restore them to the top 10 system they once were. Let’s take a look at some grade "C" prospects who, with one season, could turn themselves into grade "B" prospects and help turn this system around.

Jesse Beal: The Orioles 14th round draft pick in 2008, Beal has been very effective in pro ball so far, walking a microscopic .95/9 IP in 2009 and 1.77/9 IP last season. While his fastball isn't overwhelming, sitting 86-88 mph, he features an above-breaking ball and possesses plus-plus control. Most soft tossers need to have pin-point command in order to succeed, and Beal has just that. At 6’ 6", 210 lbs., he has room to add around 10 pounds, so an increase in velocity is certainly possible. Beal, 20, should open 2011 in Frederick’s rotation, where he’ll be about 2 years below the league average age. As long as he continues to keep the ball down in the zone and maintain his command, he should continue to pitch successfully and any added velocity will be a bonus. Continued success with the Keys could vault him to a "B" grade next year.

Tim Berry: A 50th round draft pick in 2009, Berry signed for 4th-6th round money, falling because of Tommy John surgery before the draft. A lefty, he already tops out at 92, and saying he's projectable may be selling him short. He has a nice breaking ball, which is a potential plus pitch. A lot of people overlook him because of his draft slot, but he is most definitely part of the high potential arms the Orioles have in the low minors. He's in the bullpen now, as he's being eased back from TJ surgery, but opening 2011 as part of Aberdeen’s rotation is not out of the question. Video >>

Parker Bridwell (pictured above): A three sport star in high school (football, baseball & basketball), Bridwell signed for an over-slot bonus of $625,000 as the Orioles’ 9th round selection in the 2010 draft. Now that he’s focusing on one sport the projectable righty has the ability become a serious threat on the mound. He throws a 90-95 mph fastball, curveball, changeup and cutter. Catcher Riley Hornback, who caught most of Bridwell’s bullpens during his time in the GCL said there is something unique about the way Bridwell’s sinking fastball lands in his glove. Hornback described Bridwell’s sinker as "very heavy" and said he felt like it was coming in 3-4 mph faster than it actually was. Bridwell has the bulldog mentality that you look for in a young starter and reminds me of a right-handed version of Zach Britton. When asked if there was anything from basketball or football that would carry over and help with baseball he told me, "the only similarities between the three is the feeling of winning; I hate to lose." Good stuff and command combined with focusing on strictly baseball leaves Bridwell a good chance to find success as part of the Delmarva rotation next season.

Randy Henry: With some of the best pure stuff in the system, the only obstacle ahead of Randy Henry is figuring out how to stay healthy. Despite having smooth mechanics and an easy release, Henry has had multiple injuries including Tommy John Surgery in high school and an elbow injury last season. I spoke to Henry recently and he said he feels "better than ever." He’ll pitch out of Frederick’s bullpen in 2011 though could find himself in a rotation after that. He has the stuff to start, but a mid 90’s fastball and above-average breaking ball could make him a closer one day.

Tyler Townsend: Failing to stay healthy has been Townsend’s biggest issue throughout his pro career. A wrist injury played a large part in his .143 batting average in 2009, and a hamstring injury limited him to just 197 at-bats in 2010. How many times was Townsend injured in college? None. When he’s been on the field the results have been impressive. We’ll need a bigger sample size to get a more accurate read on Townsend, but the early signs look positive. His 2010 stats over a full-season would certainly have made him a grade "B" prospect this season.

Aaron Wirsch: At 6’ 6", 200 lbs, Wirsch has an athletic frame and is very projectable. He draws Cole Hamels comparisons, as he possesses an outstanding changeup, which Joe Jordan said was better than Brian Matusz’s coming out of high school. His fastball sits in the high 80’s, very often touching 91 and 92. He’ll work in a curveball that is plus at times but inconsistent. Like most of the 2009 draft class, Wirsch also suffered from an injury which held him back from opening 2010 as part of the Shorebirds rotation. He should find himself in Delmarva to open 2011, where he’ll be part of what could be an all lefty rotation. Wirsch is a potential #3 starter.

Once again, no one is expecting an outburst like the Royals. But, the Orioles system certainly has some players with breakout potential that could return the system to relevancy.

Note: I left out some of the more obvious players who could jump into the "B" range, including: Xavier Avery, Cameron Coffey, L.J. Hoes, Ryan Berry, Bobby Bundy, etc.