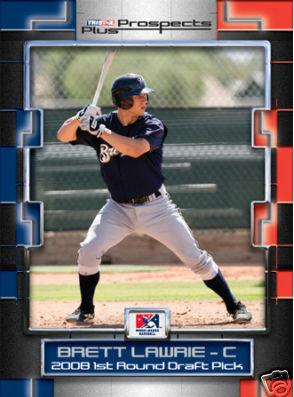 I saw the Wisconsin Timber Rattlers play three games against the Burlington Bees, July 5-7. Wisconsin won the first game 10-8, with Burlington taking the second contest 4-2. The third game was suspended due to rain with a 1-1 tie in the sixth inning. Here is a report on the players I saw for Wisconsin; a report on Burlington will follow tomorrow.

Cody Adams, RHP: Threw five innings on July 5th, allowing six hits and two runs. On the season, is 2-5, 5.40 with a 34/30 K/BB in 53 innings, 63 hits allowed. His numbers aren't much this year, but he's got a live arm, hitting 89-92 MPH with good sinking action. He  also has a good slider, but he tends to overthrow when in a jam, and his mechanics are inconsistent. Scouts told me that he was throwing just 84-85 MPH earlier this season, but seems to have gotten his velocity back up lately. He was a second round pick in 2008 from Southern Illinois.

Rigoberto Almonte, RHP: Threw an inning on July 6th, giving up four hits. On the season, 6.00 ERA with 28/14 K/BB in 27 innings, 31 hits. Lanky and thin at 6-2, 175, Almonte's fastball was 88-92 MPH, but his secondary pitches were below average, his location within the strike zone was poor, and he wasn't fooling anyone. At age 22 he still has time to develop, and the arm strength is here, but he's much more thrower than pitcher at this point.

Lorenzo Cain, OF: On injury rehab for Wisconsin, went 1-for-5 combined on the sixth and seventh, is 3-for-14 so far in five games for the Timber Rattlers. Recovering from a PCL tear, and he looks fine to me; he was running at full speed. He was making an effort to control the strike zone in the two games I saw him play, but his swing looked somewhat rusty, to be expected given his injury layoff. I imagine he'll be back in Triple-A quite soon.

John Delaney, 3B: 25th round pick in 2008 out of Quinnipiac. Not doing much with the bat, hitting .227/.348/.320 for Wisconsin and went 1-for-10 in the games I saw. Not toolsy, and his speed and strength didn't stand out as either positive or negative. He just looked like a guy playing baseball, an organization player without any one big tool or skill to carry him forward.

Peter Fatse, OF: Looked good in this series, shows a short, quick swing from the left side and will make an effort to work the count. Hitting .286/.405/.429 in 10 games since moving up from the Pioneer League. Drafted in June 2009, Fatse was a 24th round pick from the University of Connecticut. He's undersized at 5-10, 175, and might not develop much power, but he can run and has a professional hitting approach, and is adjusting to pro ball rapidly after being drafted last month.

Evan Frederickson, LHP: Supplemental first round pick out of the University of San Francisco in 2008. Big huge guy, listed 6-6, 240. Pitched three innings of relief on the sixth. Fastball ranged between 88 and 93 MPH, with lots of movement. Also had a big breaking hard curveball. He had problems commanding both pitches, due to mechanical problems; his delivery wasn't the same from pitch to pitch, hampering his command. 4.55 ERA with 55/42 K/BB in 59 innings this year, with 61 hits. You have to like the arm strength and his size, but he needs a lot of refinement.

Corey Kemp, C-1B: Hitting .284/.363/.405 so far, looked solid in all three games, going 2-for-9 but drawing four walks and showing very nice contact hitting skills. Smooth level and quick swing, hits line drives to all fields, controls the strike zone very well. Played catcher and first base, looked okay behind the plate, good enough to play there if he hits. Was drafted in the 14th round in 2008 out of East Carolina University. Scouts aren't wild about his body (6-0, 240), too short and stocky, but he has some hitting skills.

Brock Kjelgaard, 1B: A 34th round pick in 2005 from Indian Hills Community College, Kjelgaard is a Canadian who was originally a pitcher. He converted to first base in 2008. He's hitting .219/.327/.442 this year with 13 homers, but also 102 strikeouts in 274 at-bats. He's huge (6-5, 215) and has a big, slow swing, with what looks like a "slider speed" bat. He did hit a home run in the series, an opposite field line drive that barely cleared the 315 sign in right field. His power is interesting but I don't think he'll hit enough at higher levels.

Brett Lawrie, 2B: 2008 first round pick, hitting .264/.351/.459 with 14 steals this year. He had a frustrating series, going 1-for-9, hitting a couple of noisy fly ball outs, but also hitting a couple of foul balls that would have been in the stands in most parks, but were outs in Burlington. This left him visibly frustrated, loudly cursing his luck in the dugout to where everyone in the stadium can hear. Scouts weren't surprised, saying he has an "intense" personality. Lawrie hits from an open stance, makes a good effort to work the count, handled both fastballs and breaking stuff well, and had the best bat speed of anyone in the series. His play at second base was OK; he caught what he got to, and showed decent range to his left, but his range to the right was less impressive. He doesn't LOOK anything like a second baseman, due to his thick strong legs, and the scouting consensus among observers is that he'll end up in left field eventually. Despite his muscular build, his running speed is above average.

Michael Marseco, SS: 11th round pick in 2008 out of Samford. He hit .311/.338/.437 in the Pioneer League last year, but just .197/.246/.252 this year in 77 games. He went 3-for-11 in the contest, but I wasn't impressed with his bat overall; his plate discipline was shaky and he lacks power. His glove looked pretty solid at shortstop and I can see him as a utility infielder due to his speed and athleticism, but I just don't think he'll hit enough to move beyond that.

Dan Merklinger, LHP: Sixth round pick out of Seton Hall in 2007. 2.93 ERA with 40/14 K/BB in 40 innings this year, 37 hits allowed. Threw five innings in the July 7th rain suspension game and looked good doing it, allowing three hits and one run, fanning five with no walks. He's listed at 6-1, 195, but looks taller than that, with a lanky frame. He has an unusual delivery that is herky-jerky but oddly smooth at the same time; it's hard to describe and I wish my video camera had been working. Fastball ran 87-92 MPH. Good slurveish breaking ball. Very tough on lefties this year, holding them to a .154 mark, and relief work may be his destiny at higher levels.

Liam Ohlmann, RHP: 20th round pick in 2008 from Manchester Community College. 3.70 ERA with 43/24 K/BB in 41 innings this year, 36 hits allowed. Big bulky guy at 6-0, 245. Fastball mediocre at 87-89 MPH, average breaking ball. Hit hard on July 5th, giving up two earned runs in 1.2 innings on two hits and a walk; seemed to be having problems locating both his fastball and breaking ball. Definitely needs to sharpen his command in order to have a future at higher levels, given his average stuff.

Wily Peralta, RHP: Signed out of the Dominican Republic in 2006. Peralta pitched four innings on the sixth, allowing four hits and two earned runs. He had the best stuff of anyone in the series, hitting a consistent 93-95 MPH. Scouts told me they'd seen him as high as 98 earlier in the year. He has a decent slider, but his changeup needs work, and his overall command is erratic. There's some effort in his delivery, and that (plus the changeup issue) may make him a reliever in the long run, though he definitely has enough stuff to close if the bullpen is his eventual destination. 3.48 ERA with an 86/22 K/BB in 67 innings this year, 59 hits. . .excellent K/IP mark reflects the plus stuff.

Brandon Ritchie, LHP: 24th round pick in 2008 from Grand Rapids Community College. Big guy at 6-4, 230. 1.98 ERA with a 30/15 K/BB in 36 innings this year, 26 hits allowed. I was impressed with him; his fastball hits 90-93 MPH with a lot of sinking action, and his breaking ball looks effective against left-handed hitters. Indeed, he's holding them to a .135 mark this year. He needs to polish his command, but if does that he can help in a major league pen, as a LOOGY at least but with enough stuff that he can handle right-handed hitters if need be.

Juan Sanchez, OF: Venezuelan outfielder originally in the Twins system. Hitting .246/.305/.325. Went 4-for-12 with a home run, his first of the year, and it was a nice hard shot hit to left field. He's athletic but undersized at 5-11, 170. Speed a tick above average. He has some tools but his performance overall this year hasn't been enough for him to rate as a genuine prospect, given age 22 in the Midwest League.