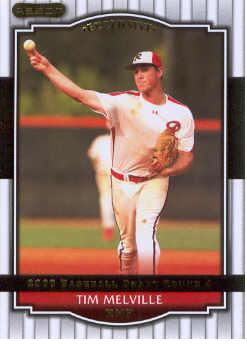 Here is what I saw out of the Burlington Bees on July 5th through July 7th.

Jose Bonilla, C: Signed out of the Dominican Republic in 2006, hitting .223/.272/.332 in 55 games. Looks very good defensively, quick and agile, strong arm. Doesn't look too good with the bat. Line drive swing, but doesn't drive the ball, makes soft contact, and strike zone judgment is below average. He runs unusually well for a catcher and is quite athletic overall, but the bat will make or break him. Just 20 years old, so still has a chance to develop.

Nick Francis, OF: 15th round pick in 2006 out of Pensacola JC. Hitting .276/.330/.464 with 10 homers and 11 steals, but also has 87 strikeouts in 261 games. Very toolsy and I was impressed with his speed and strength. However, his approach is unrefined, his swing is long, and he's got serious problems against breaking balls. It also looks like he can be tied up with inside fastballs. Has a good throwing arm and outfield range, but is pretty raw for a 23 year old in the Midwest League. I doubt he's going to hit well at higher levels.

Shawn Griffin, OF: 20th round pick in 2008 from University of Tennessee. 6-for-24 after joining the team from extended spring training. OK tools, runs fairly well for his size (6-3, 200), appears fundamentally sound on defense and on the bases. Seems to swing and miss a lot. He didn't stand out in the games I saw as either really good or really bad, just kind of there, and there isn't enough of a statistical record to draw conclusions.

Blaine Hardy, LHP: 22nd round pick in '08 from Lewis-Clark State College. Good numbers, 2.49 ERA with 61/13 K/BB in 65 innings, 59 hits allowed. Fastball at 87-89 MPH, uses a hard slider at 81 MPH and a slower curve at 74-75. His slider has good bite. You would think he'd be more effective against left-handed hitters as a result, but actually they hit him pretty well (.319 this year) while right-handers struggle (.221). If that pattern continues, he won't be a good LOOGY. Hardy has an exceptionally good pickoff move, nailing two runners in three innings of work and almost nailing a third.

Eric Hosmer, 1B: 1st round pick in 2008 out of high school in Florida. Hitting .256/.355/.384. As I mentioned before, his swing looked pretty bad in the first game I saw, slow and mechanical, but in the second and third games it looked quicker, and he pulled a 92 MPH Wily Peralta fastball for a home run. His strike zone judgment is excellent; he just lets bad pitches go by and is difficult to fool. Although he is a slow runner, he is alert and intelligently aggressive and will take an extra base if offered. He looks like a very strong defensive first baseman to me. Overall, I'd say that Hosmer needs work making his swing more consistent to tap into his strength more effectively, but that there is a good chance he'll be able to do this. He just needs more experience.

Mike Lehmann, RHP: 20th round pick in 2007 out of high school in Mississippi.
3.77 ERA with 24/18 K/BB in 45 innings, 40 hits. Pitched five solid innings until the rain delay on the 7th. Clean and simple delivery, has a good curveball and a very good changeup. Fastball was mediocre at 85-87 MPH, and the lack of velocity keeps him from being a better prospect at this point. He changes speeds pretty well, but needs to sharpen his command within the strike zone. He's just 20 years old, but at 6-2, 185, he doesn't have the classic projectable body. If he can gain another 3 MPH, he would be a very interesting prospect.

Mark Maddux, 2B: Ninth round pick in 2006 out of Southern Miss. On rehab assignment; he played Double-A last year. Not toolsy, but very fundamentally sound and hustles. Good plate discipline, but not a great deal of power. 3-for-26 (.115) in eight games of rehab work here, but hit .283/.363/.375 last year in Double-A. Possible bench player eventually, though lacking the range for shortstop.

Sean McCauley, C: 12th round pick in 2007 out of high school in Virginia. Hitting .231/.297/.321. Started the July 7th game, but went 0-for-2 with two strikeouts before the game was delayed. I wasn't impressed; I thought his bad looked slow. I didn't get a sufficient read on his defense.

Tim Melville, RHP: Fourth round pick in '07 out of high school in Missouri. 4.11 ERA with 37/20 K/BB in 46 innings, 45 hits allowed. He had a great start on the sixth, allowing one run in six innings, fanning seven. Melville's fastball was strong at 90-93 MPH, and he was able to hit spots with it. His curveball and changeup were also very impressive, and he mixed all three pitches quite well, keeping the hitters off balance effectively. His mechanics were a bit inconsistent: in the first inning they looked flawless, but in the second and third inning his delivery would fly open a little before settling back down in the fourth. This is typical stuff for a 19 year old pitcher and should get better with experience. Overall, I thought he looked very good.

Michael Montgomery, LHP: Supplemental first round pick in '08 out of high school in California. I didn't get to see him pitch: he threw on the fourth. Although he walked five guys in 5.2 innings in that start, scouts I spoke with who saw him pitch were effusive about his potential, reporting his fastball at 91-94 MPH and saying that his breaking ball looked very good when he didn't overthrow it. 1.69 ERA with a 42/21 K/BB in 48 innings on the season, with 33 hits allowed.

Patrick Norris, OF: 16th round pick in 2007 out of Oklahoma City University. Hitting .231/.307/.236 with 28 steals in 32 attempts. Blazing fast. I mean really fast, I'd give him an 8 on scouting scale for speed. Unfortunately, he can't hit. He works the count OK, but he has less power than Joey Gathright (not joking) and has problems poking the ball past the pitcher's mound. One double in 216 at-bats this year, and that's it for extra bases.

Riquy Pena, RHP: Originally signed by the Rockies out of the Dominican, picked up by the Royals as a free agent. 4.76 ERA with 6/8 K/BB in 11 innings this year. He throws hard, works at 90-94 MPH, and his slider has some bite, but his control is poor and he throws across his body. Already 24 years old and still trying to figure out A-ball hitters. The stuff is here, but a thrower, not a pitcher.

Juan Rivera, SS: Originally signed by the Dodgers out of the Dominican, was traded to the Royals last year for Angel Berroa. Excellent defender, with above average range, soft hands, and a strong arm. He can't hit, though, .243/.271/.330 this year, with poor strike zone judgment and very little power. At age 22 he theoretically has some development time, but from watching him play I just don't think he's strong enough to ever hit at higher levels. His glove will keep him employed for a long time, though. He actually hit a home run in the rain-shortened tie game, hitting an opposite field fly ball that just barely cleared the 318 right field line. In most parks it would have been an out.

Sam Runion, RHP: Second round pick in 2007 out of high school in North Carolina. 6.15 ERA with 37/26 K/BB in 79 innings, 110 hits allowed. It was frustrating to watch Runion pitch. You can see the talent in him: his fastball is 88-92 MPH, and he has a useable splitter. But his curveball and slider are very much below average, and he just gets whacked as a result. He pitched five innings and gave up 10 hits, and they weren't bloops either. His fastball has good run, and the splitter could be an out pitch with more refinement, but without an effective third pitch he has no chance as a starter. It might be better to just stick him in the bullpen and get it over with.

Derrick Saito, LHP: 16th round pick in '08 out of Cal Poly. Just traded to the Mariners in the Betancourt deal. Saito has a 4.15 ERA with a 53/15 K/BB in 52 innings, 50 hits allowed. His fastball is mediocre velocity-wise as 86-89 MPH, but it plays faster because of a solid breaking ball that he mixes it with. He's tough on lefties (.196 this year) and could be an effective LOOGY if his command holds up at higher levels.

Jason Taylor, 3B: Second round pick in 2006 out of high school in Virginia. Just activated after beginning the year suspended for drug use. 9-for-37 so far with a homer and four doubles. I actually like Taylor quite a bit: the only player in this series with more bat speed was Brett Lawrie. He's a decent athlete and a heady baserunner as well, but needs to get more consistent in general, and prove that his makeup is tolerable. He missed all of 2007 on the suspension list as well, so he's got a long-standing personality issue. He hit .242 last year for Burlington, but with 17 homers, 40 steals, and 81 walks. There is talent here; can he use it properly?

Nick Van Stratten, OF:  10th round pick in 2006 from St. Louis Community College. Hitting .314/.388/.428 with 13 steals. Crowd favorite due to speed and hustling approach. He doesn't have huge power, but lashes liners from field to field and usually makes solid contact. Decent arm strength and good outfield range are other positives. Main issue is age: he's already 24 years old, which limits his projection.