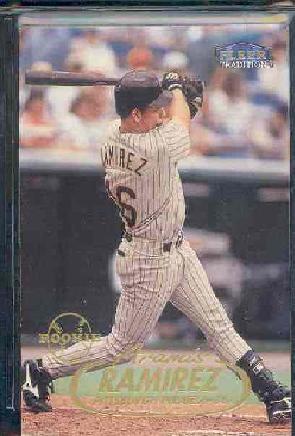 Aramis Ramirez was signed by the Pirates as a free agent out of the Dominican Republic in 1994. He made his North American debut at the age of 18 in 1996, playing for Erie in the New York-Penn League. He hit great: .305/.403/.525, with nine homers, 31 walks, and 41 strikeouts in 223 at-bats, showing the ability to hit for both average and power, and demonstrating fine strike zone judgment. I was writing the STATS Minor League Scouting Notebooks back then, and space limitations prevented us from writing much about the short-season leagues in the early editions, but a similar prospect now would get something like a Grade B+ from me, being young, relatively polished, and successful against older competition in his debut.

Promoted to Lynchburg in the Carolina League in 1997, Ramirez continued to rake, hitting .278/.390/.517 with 29 homers, 114 RBI, 80 walks, and just 103 strikeouts in 482 at-bats. His +25 percent OPS was third in the Carolina League, and he was the youngest player in the circuit. He was error-prone, but scouts said he had the range and arm strength to handle third base with more experience. I gave him a Grade A in the 1998 book and rated him the Number Five prospect in baseball. The top four were Adrian Beltre, Ben Grieve, Paul Konerko, and Todd Helton.

The Pirates promoted Ramirez aggressively in 1998, splitting his season between Triple-A Nashville (.274/.374/.423 in 47 games) and the majors (.235/.296/.351 in 72 games). He was obviously overmatched against major league competition, but given his age and lack of experience above A-ball, this was understandable. He blew past rookie qualifications, so he wasn't in further books.

As a prospect, Ramirez was always very young for his leagues, but put up excellent numbers anyway, until being rushed to the majors in '98 with little high level experience. His strikeout rate was notably low for a young power hitter, and he controlled the strike zone well. If he had spent 1998 in Double-A instead of being pushed to the Show so fast, perhaps he would have had an easier time transitioning to the majors in '99 and '00.

We need to see how Aramis ages. His last five OPS+ marks are 138, 135, 126, 129, 128, giving him some impressive consistency the last three years, though not quite at his age 26-27 peak. If he lasts long enough at this level of performance, he could eventually get some borderline Hall consideration, though a normal age curve would make him fall short I think.