Jackie Bradley of the Red Sox: what happens now?

Share All sharing options for: Jackie Bradley of the Red Sox: what happens now?

"Jackie Bradley. WTF? What happens now? Is there any chance he can recover from this complete debacle?"---Clint, Portland, Oregon.

Well, it has certainly been a disappointing season for Bradley, but I don't know if I'd go so far as to say "complete debacle." For me, that phrase implies a player who has no value at all, and while Bradley has struggled offensively, he does have value due to his defense. In fWAR terms, his glove has been good enough to keep his WAR value positive at 1.5 this year, despite the statistical headwind created by his poor hitting.

Of course the hitting can't be ignored, either by the Red Sox or by fantasy owners who expected the rookie to provide at least some offensive value. Most fantasy contexts don't value defense, so yeah, if you were counting on Bradley to be a key part of your lineup, I suppose Clint is right and it really is a debacle. 0-for-35 slumps will do that.

So is there any hope at all?

Let's start with what was expected pre-season. This is the comment I wrote for my book:

With Jacoby Ellsbury moving on to New York, Jackie Bradley looks likely to take over center field in Fenway Park for 2014. He’ll do a fine job defensively, given his impressive instincts and strong throwing arm. On offense, he’ll show some power and take a walk, but there’s concern about his ability to handle inside pitches, issues that major league pitchers exposed when he was promoted too quickly last spring. I wouldn’t expect him to win batting titles, but once he settles in, I expect Bradley will produce offensive numbers in the majors similar to what he did in Double-A and Triple-A: hit .250-.270 with enough pop and OBP to be above-average as an offensive producer even with a non-stellar average. Combine that with the defense and you have a player who should have a long career as a regular. Grade B+.

The good defense part came true, but major league pitchers have taken apart his swing and Bradley hasn't been able to put it back together. He hit .216/.288/.290 in 387 plate appearances this year, hitting just one home run. Taking this year's struggles and the 37 games he played in the major leagues in 2013, Bradley is hitting .210/.287/.300 in 494 plate appearances over 149 major league games, hitting 24 doubles, two triples, four homers, with 41 walks and 142 strikeouts.

Looking at his entire career context, here are some random observations and thoughts:

***Bradley has a solid track record in the minor leagues, hitting .296/.402/.468 over 829 at-bats. This included a .275/.374/.469 line last year in Triple-A, which factored out to a wRC+ of 137 and a wOBA+ of 119. While his batting average at Pawtucket wasn't wonderful, his power and patience made him a highly-productive offensive player last year considering the context.

***The Red Sox responded to this, as they should have, by giving him a full chance at the job this year and not pulling the plug immediately even when he struggled. He got a fair chance.

***Although Bradley's overall track record as a hitter is strong, he does have a past history of long slumps and up-down performances. His 2011 season for South Carolina, for example, was much weaker than anticipated following stellar freshman and sophomore campaigns, although they retained enough faith in him to still see him as a first-round talent. The point is that he's been through something like this before and eventually pulled out of it. 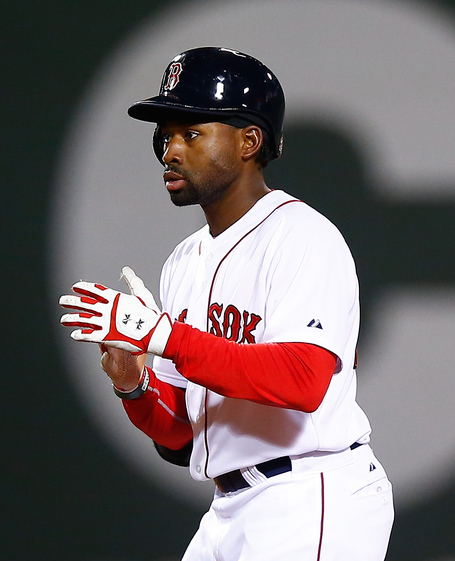 ***Batting average is never going to be Bradley's strength; even an optimistic projection from his track record makes him out as a guy who produces due to OBP and moderate power. If Bradley had hit for more isolated power or drawn more walks, he could very well have kept his job even with the weak batting average. Of course, he didn't do those things and we can't pretend that he did.

***One frequent comp for Bradley pre-season was Mike Cameron. Interestingly, Cameron himself had a horrible go early in his big league career, hitting just .210/.285/.336 with 37 walks and 101 strikeouts in 443 plate appearances at age 25 for a wRC+ of 64. That is very similar to what Bradley has done so far. Cameron improved a great deal from that point and became the .250ish hitter with power, speed, and defense that Bradley could still become.

***However, that's just one example. You can find a lot more guys who stink early and stay that way. It does indicate however that Bradley's early struggles are not automatically fatal to his chances.

***He needs at-bats to resolve his swing mechanics and get his confidence back,so the trip to Pawtucket seems wise. If I were the Sox, I would bring him back up to the majors at the completion of the minor league season, give him some additional playing time in September, then assess where we are. Perhaps they could send him to winter ball in Latin America for additional reps, if he's amenable.

***Given the entirety of his track record, his physical profile, and the impressive glove, it is too soon to give up on Bradley, but he can't be guaranteed a job for 2015, either. My take is that Bradley is not as bad as he looked this year and will eventually pull out of this, emerging as the expected player with a mediocre batting average but productive secondary skills and terrific defense.

However, it could take a while for that to happen, and a Red Sox team looking to win in 2015 may not feel that they can be patient. Depending on what happens with other outfield options, he may fit best as a fourth outfielder next year, if he fits on the Boston roster at all. It would be unfortunate to give up on him while his value is low, but ultimately a trade and a fresh start may be in everyone's best interest if he can't unlock the bat soon.