Because no matter how much attention was diverted to your ruined college basketball brackets this weekend, there still was in fact, college baseball games played too.

That's right, alright. I attended a college baseball game too. Saturday's affair between South Carolina and Arkansas. Ryne Stanek took the hill and only threw a CG for Arkansas. Nolan Belcher, the Jamie Moyer of college baseball (not age wise, but stuff wise), opposed him. A fun matchup to watch even though the Gamecocks came up short. I'll have a game report on Stanek tomorrow. Here's what else I deem noteworthy from this weekend:

- Best Team: #1 North Carolina - The Tar Heels (21-1) should hold onto the top spot after two dominant wins over a mediocre Boston College squad. Kent Emmanuel tossed another gem. Colin Moran continues to rake batting .395 on the season. LSU is a close second and could surpass the tar heels soon.

- "Back to Earth" Team of the Week: #27 Central Arkansas The Bears had just three losses all season entering their conference opener with Oral Roberts. Add three more.

- "Not Just A Basketball School" Teams of the Week: #8 Kentucky and Gonzaga - #8 Kentucky took on #10 Mississippi State and took 2 out of 3 from the Bulldogs. Gonzaga hosted Kris Bryant and the preseason WCC favorite San Diego Torreros and also managed to win their series. Bryant: (4-11, No HR), Marco Gonzales: (7 IP, 5 H, 1 ER, 3 BB, 9 K)

- Worst (Best?) Meltdown: Lamar pitchers - The Lamar offense spotted them a 9-0 lead in the first inning and they still wet the bed as Lamar lost a thriller with McNeese State, 14-13.

- Best Beatdown: Washington State - The Cougars have defeated Brown in all 3 games by a combined score of 42-3 - and they still have a 4th game to play later today. Gonna be a loooong trip back home for the Ivy Leaguers.

- Finally Living Up To Preseason Standards: #16 Arkansas - They just had to pick the weekend they come to Columbia to start playing like a preseason #1 team. After a 15-3 barrage Friday night, followed by an impressive outing by Ryne Stanek on Saturday, the Hogs completed the sweep with an extra innings win on Sunday. They're now 17-7, 4-2 in Conference.

- Mid Major Team of the Week: South Alabama - The Jaguars can flat out hit legit. They improved to 21-4 (5-1) as they took out Southeastern Louisiana and swept UALR. Their top draft prospect according to Baseball America is Preseason Sun Belt Player of the Year, Jordan Patterson - 1B.

- A New C-USA Power: #28 Houston - Look out Rice. Houston is off to their best start in 23 years as they improved 20 - 4 following a big sweep of East Carolina. 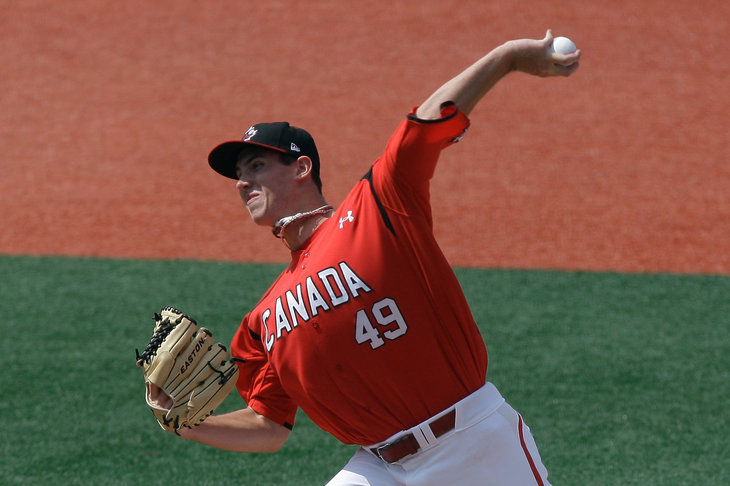 - Pitcher of the week: Ryan Kellogg - LHP - Arizona State - Threw a no hitter on the road versus #4 Oregon State AND he's just a freshman! Seriously though, why can't someone throw a Perfect Game? Its just no hitter after no hitter with these kids. Well, Kellogg came painfully close, with a couple fielding errors holding him back from attaining the perfecto.

- Hitter of the Week: Hunter Renfroe - RF - Mississippi State - Renfroe had a weekend to remember, going 5-9 with 3 HR, 5 RBI, and 3 BB versus Kentucky. That's the kind of power outburst we like to see from the potential 1st or 2nd rounder.

- Stinkbomb of the Week: Kevin Ziomek - LHP - Vanderbilt - Ziomek dropped the ball Friday night versus Florida in a losing effort (6 IP, 5 H, 4 ER, 5 BB, 1 K) in front of the home crowd. Big 7-1 win for the sruggling Gators. It's all good for Vandy though as they rebounded to take the series.

- "Who's this guy?" Award: C.K. Irby - RHP - Samford - Against a solid Furman ball club the Junior righty threw a CG shutout (9 IP, 3 H, 0 BB, 16 K). This prompted me to take a look at Baseball America's preseason SoCon preview. Irby is rated the #3 draft prospect in the conference behind David Whitehead, RHP, of Elon and #1 of course, Philip Ervin who hit a HR in Irby's 9-1 win.

Who's Rising, Who's Falling (LSU Edition)

- Falling: JaCoby Jones - 2B - In an offense that features a .308 team batting AVG, Jones is struggling, batting just .215 with 2 HR on the season. He has drawn 21 BB and stolen 9 bases but the hit tool is still a question mark. Not to be confused with this Jacoby Jones.

Nolan Belcher's scoreless innings streak was snapped at 30 which means we have a new...

This needs to stop...

No No Alert part deux: Cameron Finch - RHP - Murray State - Yes, another one. Has this always been a weekly occurence in college baseball? Not sure, but expect two more next week.

- Ready For Prime Time: Braden Shipley - RHP - Nevada - Get used to hearing this name. The preseason MWC pitcher of the year has been rising on draft boards thanks to improved fastball velocity. In the hellacious bandbox that New Mexico calls it's home field, Shipley turned in a solid outing (7 IP, 5 H, 2 ER, 2 BB, 3 K).

The latest rankings from Collegiate Baseball

That's all I got this time. Have a great week. Stay classy, not crassy