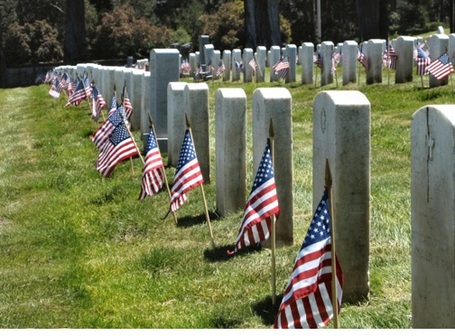 Memorial Day was originally known as Decoration Day, a holiday to honor Union veterans of the Civil War.

Yesterday, Jeri and the kids and I drove through a local cemetery here in Lawrence. In accordance with Memorial Day tradition, people had gone through the grounds and planted American flags on the graves of veterans. I was pleased to see that the oldest sections of the cemetery, dating back to the 1860s and 1870s, had not been neglected. Graves with the marker "GAR" had been properly tended. Many of them were so worn that the names of the dead were no longer visible, but the GAR ("Grand Army of the Republic") markings could still be made out.

Then we noticed five headstones seperated by some distance from the other GAR graves. These stones also had American flags, but instead of the GAR symbol, they were marked "USCT"....."United States Colored Troops.". These five men rallied to the Union cause, yet while their service was honored in death, they were still buried on a seperate plot from the rest of their fellow veterans.For some reason, this really got to me and has been on my mind ever since.

The ideals of freedom and self-governance enshrined in the Declaration of Independence and the Constitution are what make this country great. Our greatest weakness as a country has been our too-frequent failure to make these principles a reality for all of our citizens. We've made great progress in these areas, especially since the 1960s, but there is still much left to do. Two common responses to holidays such as this are apathy and patriotic drumbeating. In my view, both apathy and "America right-or-wrong-ism" are actual betrayals of what our veterans fought and died for.

Let's all take at least a  moment from camping and barbeques and baseball today and think about the men and women who fought and died for freedom. Let us also strive to be a nation worthy of their sacrifices.