Who is rookie Kelby Tomlinson of the San Francisco Giants?

Share All sharing options for: Who is rookie Kelby Tomlinson of the San Francisco Giants?

More than one reader has asked recently for my take on San Francisco Giants rookie infielder Kelby Tomlinson. Recently promoted to the major leagues, Tomlinson is doing his best Matt Duffy impersonation, hitting .321/.376/.414 between Double-A and Triple-A followed by a .355/.376/.516 line in his first 31 major league at-bats. Like Duffy before him, Tomlinson wasn't a highly-rated prospect coming up but is sure performing like one right now.

Okay, so where did this one come from?

Texas Tech, actually, drafted in the 12th round in 2011. Living in Kansas, I keep close track of the Big 12 college players so I was familiar with him. Looking back through my old notes, here is the report I wrote for myself after seeing him play in 2011:

This is typical of the notes I make for myself while researching prospects. A report from a real scout would include projections or observations on the 20/80 scales but I’m a writer, not a scout, and I like using words.

So here he is at age 25, suddenly showing more pop and arriving in the majors as a result. Watching him play, and comparing him mentally to the 2011 version, the 2015 edition of Tomlinson looks like the same guy in most respects. He still does a decent job making contact, still runs well, looks alert and can handle his infield duties without trouble. I don't see any massive changes in his swing or approach, but the ball just seems to travel further now. 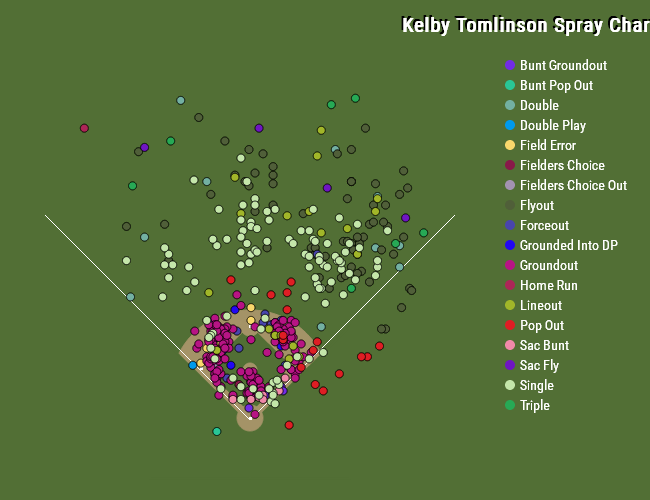 I"d love to compare video from 2011 to video from 2015 to break down any subtle mechanical changes, but don't have that kind of information available at the moment (if you do, speak up). Nevertheless, it seems fair to conclude that Tomlinson is stronger than he was four years ago and is now driving pitches that led to weak contact in the past more effectively.

I don't think Tomlinson is going to replicate what Duffy has done in a larger sample and I wouldn't expect him to keep hitting .300+. But he can probably hit .260 with enough speed and defensive contributions to carve a career as a utility player.

What do you think?