Jose Abreu was the top rookie in Chicago, but others contributed as well, particularly on the pitching staff.

Today we complete the 2014 organization reviews with the last team, the Chicago White Sox. Remember, this is the PRE-SEASON List. This is not a new list. These are pre-season rankings and grades. This is a general overview of 2014, not a detailed preview for 2015.

2) Erik Johnson, RHP, Grade B+: Borderline B. Age 24, I liked him a lot pre-season but he had a terrible year, 6.73 ERA with 65/54 K/BB in 106 innings for Triple-A Charlotte, 136 hits. All component ratios way off from last year. Shut down in early August with "shoulder fatigue." Reports from International League observers say that both his command and his stuff slipped significantly compared to 2013, which certainly shows up in the numbers. My guess is that his shoulder wasn’t right all year but he tried to pitch through it. That’s a guess; we’ll see if there is any truth to it.

I had the White Sox ranked 23rd pre-season on the farm system ranking list.

The big league club finished a disappointing 73-89 but some rookies did contribute. The big one was Jose Abreu, of course, the Cuban defector who annihilated major league pitching for most of the year, finishing with a 169 OPS+. Fellow rookies Marcus Semien, Leury Garcia, and Carlos Sanchez all saw infield time but didn’t hit well; all three are still young enough to improve considerably. Sophomore outfielder Adam Eaton hit .300 with a 117 OPS+, and the Sox got good bullpen work from Jake Petricka (14 saves, 2.96 ERA) and Daniel Webb, while 29-year-old rookie Scott Carroll ate 129 innings with 19 starts and seven relief outings. This helped make up for the failure of Erik Johnson. 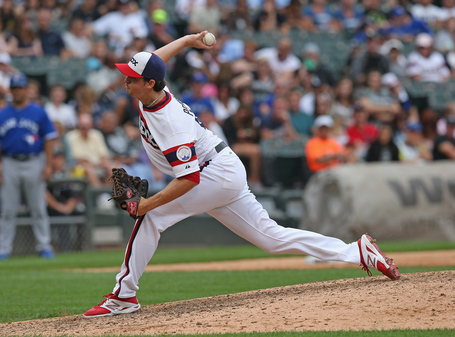 The 2015 list will look considerably different than the ’14 list. The top slot will go to 2014 first round pick Carlos Rodon, who hopes to duplicate the rapid success that Chris Sale made a few years ago. Other key arms with rising stock include Tyler Danish, Francellis Montas, strike-machine Spencer Adams, and Adam Dunn trade acquisition Nolan Sanburn from Oakland, all right-handers.

The Sox have shown some skill identifying pitching but hitting is weaker. Tim Anderson and Micah Johnson provide more up-the-middle athleticism and tools, but there are doubts about both bats. You can draw a scenario where both become solid regulars, but both could also fizzle. Courtney Hawkins has enormous power and made progress overcoming his difficult 2013 season, but hopefully he won’t take hitting lessons from Matt Davidson. Trayce Thompson, Jacob May, and Adam Engel provide plenty of outfield tools but no guarantees with the bat.