This afternoon we move forward with our organization reviews, examining the Tampa Bay Rays. Remember, this is the PRE-SEASON list. This is not a new list. These are pre-season rankings and grades. This is a general review of 2014, not a detailed preview for 2015.

17) Jose Mujica, RHP, Grade C+: Age 18, pitched just three innings in the GCL in late August after being laid up most of the spring and summer.

Although the major league club will finish under .500, 2014 was generally a good year as far as the Tampa Bay Rays farm system was concerned. The Rays ranked 25th on the pre-season organization ranking list but should move up a few notches entering 2015.

The Rays got a strong campaign out of rookie starter Jake Odorizzi, while outfielder Kevin Kiermaier did enough to solidify his hold on an outfield roster spot for the future. 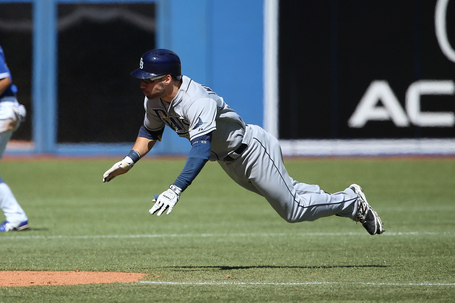 Alex Colome and Matt Andriese have nothing left to prove in the minors and could slot onto the big league roster next year. Outfielder Mikie Mahtook pushed his way back up the lists after a so-so 2013 in Double-A, hitting .292/.362/.458 with 12 homers and 18 steals this season for Triple-A Durham. Catching prospect Justin O’Conner is another rebounder, hitting .278/.316/.466 on the year between High-A and Double-A at age 22 to restore his prospect status.

Other holdovers of interest are Triple-A lefty Mike Montgomery, who continues to flash major league ability, and Double-A strike-throwers Grayson Garvin and Dylan Floro, and A-ball control expert Jacob Faria. Infielder Jake Hager hit .271/.316/.376 in Double-A at age 21. None of these guys are exceptional prospects but all are capable of contributing something.