The Oakland Athletics farm system provided firepower for trades this summer and should have an intriguing Double-A lineup core in 2015, but more arms are needed.

We continue our organization reviews today with the Oakland Athletics. Remember, this is the PRE-SEASON list. This is not a new list. These are pre-season rankings and grades. This is a general review of 2014, not a detailed preview for 2015.

3) Raul Alcantara, RHP, Grade B-: Borderline B. Pitched 20 innings for Midland then went down with Tommy John surgery. Age 21.

Oakland ranked 27th on the preseason organization rankings list and will still rank towards the bottom entering 2015, although the system is not fully depleted.

Summer trades took the top edge off this system, with Top 10 prospects Addison Russell, Billy McKinney, and Nolan Sanburn all changing hands. The 2015 list is going to look considerably different.

There is still an intriguing offensive core with Nunez, Robertson, Olson, Healy, catcher Bruce Maxwell, outfielders Jaycob Brugman and Aaron Shipman, and infielder Chad Pinder all heading to Double-A to open next year. That could be a very solid lineup. 2014 draftee Matt Chapman hit a disappointing .237/.282/.389 for Beloit coming out of Cal State Fullerton but he could be more effective in the Cal League. Outfielder Boog Powell hit .335 in the Midwest League and could thrive in the Cal League environment.

Pitching isn’t as impressive. Alcantara’s injury was badly-timed, Ynoa isn’t living up to his potential, and Wahl was disturbingly mediocre. On the other hand, Dillon Overton looks fully recovered from Tommy John, showing the same outstanding pitchability he demonstrated at the University of Oklahoma. 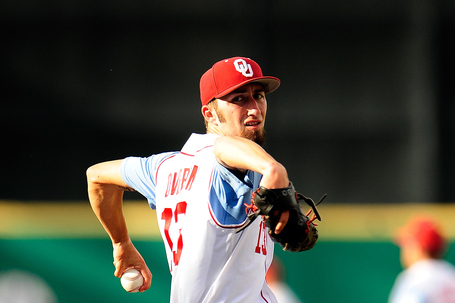 Seth Streich had a good year for Stockton (3.16 ERA, 116/22 K/BB) but went down with a shoulder injury in late July. 2014 pitching drafts Daniel Gossett and Brett Graves could advance quickly. Tucker Healey and Seth Frankoff could help in the bullpen soon.

There's some depth in hitting but more impact arms are needed.