The Milwaukee Brewers farm system still lacks impact depth, but there was good news for the organization in 2014.

We continue our organization reviews this afternoon with a look at the Milwaukee Brewers. Remember, this is the PRE-SEASON list. This is not a new list. These are pre-season rankings and grades. This is a general review of 2014 not a detailed preview for 2015.

4) Devin Williams, RHP, Grade B-: Borderline C+. Age 20, posted 4.48 ERA with 66/20 K/BB in 66 innings for Helena in the Pioneer League, 74 hits. Not dominant statistically but a very live arm, transition to full-season ball will be illuminating.

16) Hunter Morris, 1B, Grade C+: Borderline C. Morris will rank ahead of Rogers on every other prospect list due to his draft pedigree, but he’s only five months younger than Rogers and hasn’t been as productive due to weaker plate discipline and more serious contact issues. Hit 24 homers in Triple-A but wasn’t promoted to the majors for September. Neither Rogers nor Morris offer much defense, both are slow slugger types, but Rogers has a more consistent track record, strikes out less, and they are not that far apart in age. I will go where the numbers lead me in this case and put Rogers ahead. That looks like the right decision, as Rogers out-hit Morris again. Age 25, Morris hit .279/.323/.448 with 11 homers, 20 walks, 74 strikeouts in 330 at-bats for Nashville.

The Brewers ranked 29th on my pre-season organizational ranking list, but there was good news on the farm this year. Jimmy Nelson looks like he will be a workhorse starter, and fellow right-handers Taylor Williams, Tyler Wagner, and Taylor Jungmann all had solid campaigns. Right-handers Jorge Lopez and Drew Gagnon also boosted their stock, and the 2014 draft brought in highly-regarded lefty Kodi Medeiros. There’s a foundation for a pitching staff here.

Positionally, the best news was the development of catching prospect Clint Coulter and a solid season from outfielder Tyrone Taylor. The ’14 draft added a pair of extremely high ceiling high school bats in Monte Harrison and Jake Gatewood, although both will need time and Gatewood is high risk in particular.

The system still lacks impact depth, but the Brewers have shown an admirable ability to identify under-rated talent. Sophomore second baseman Scooter Gennett hit .291/.322/.437 and is a feather in the cap of the system. Outfielder Khris Davis, another sophomore, contributed 36 doubles and 22 homers in the majors despite scout skepticism about his tools. 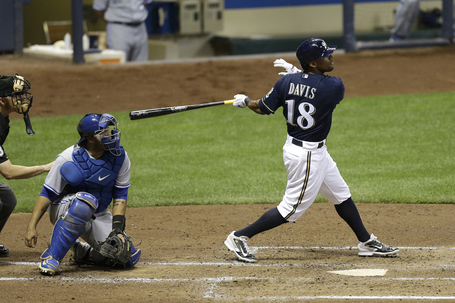 Mike Fiers, like Davis a late-round pick who didn’t excite scouts, returned to effectiveness after an injury-plagued ’13: he now has 218 major league innings with a 3.51 ERA and a 221/61 K/BB, showing that you don’t need a blazing fastball to get people out.

Overall, this system still needs work but it was a year of improvement.