Rookie pitchers Marcus Stroman and Aaron Sanchez were big successes in Toronto, but the Blue Jays farm system has more talent on the way.

This morning we continue with our prospect reviews with an examination of the Toronto Blue Jays system. Remember, this is the PRE-SEASON list. This is not a new list. These are pre-season rankings and grades. This is a general review of the 2014 season, not a detailed preview for 2015.

4) Daniel Norris, LHP, Grade B: Age 21, large step forward, combined 2.53 ERA with 164/43 K/BB in 125 innings between High-A, Double-A, Triple-A. Always has a good arm but mechanical refinements and improved command have made him one of the top southpaw prospects in baseball this year.

How the system looked pre-season.

Although the major league club has hovered around .500, 2014 was a good year for the Blue Jays from a player development perspective. Rookie starter Marcus Stroman met or exceeded all expectations, while fellow top pitching prospect Aaron Sanchez dominated out of the bullpen. Daniel Norris took a huge step forward, and 2013 draftee Kendall Graveman jumped from an eighth-round slot out of Mississippi State to the major leagues in one year. Big lefty Matt Smoral made good progress in short-season ball. The 2014 draft brings in right-handers Jeff Hoffman (who needs to recover from Tommy John) and Sean Reid-Foley, both capable of being above-average or better major league starters.

For all the good pitching news, there were many positives on the position side as well. Canadian outfielder Dalton Pompey broke out with a .317/.392/.469 campaign with 43 steals and 52 walks at three levels, pushing himself to the top of the position player charts. 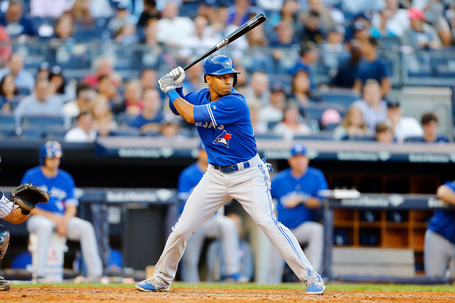 The 2014 draft brings in advanced college catcher Max Pentecost, and results from the large group of recent Latin American signees were positive, with Franklin Barreto, Dawel Lugo, and shortstop Richard Urena all thriving at the lower levels.

The Blue Jays were ranked 15th pre-season. Their ranking entering 2015 will certainly rise, perhaps into the elite level given the positive development of the upside talents and a good infusion from the draft class.