The veteran-laden Philadelphia Phillies need to to integrate more young talent onto the roster, but a mediocre farm system will need time to produce.

This afternoon we continue our prospect review series with a look at the Philadelphia Phillies organization. Remember, this is the PRE-SEASON list. This is not a new list. These are pre-season rankings and grades. This is a general review of 2014, not a detailed preview of 2015.

3) Jesse Biddle, LHP, Grade B+: Borderline B. Age 22, tough season ith 4.58 ERA, 92/51 K/BB in 94 innings, 82 hits, mainly for Double-A Reading but with three rehab outings mixed in. Struggled with command and serious concussions symptoms after getting hit in the head with a hailstone.

A disappointing season for the veteran-oriented Phillies at 71-85. The farm system didn’t provide much help, the main exceptions being reliever Ken Giles and right-hander David Buchanan, a Grade C prospect who was hit hard in Double-A in 2013 but had a huge leap forward to big league success this year, with a 3.77 ERA and a 71/32 K/BB in 112 innings. 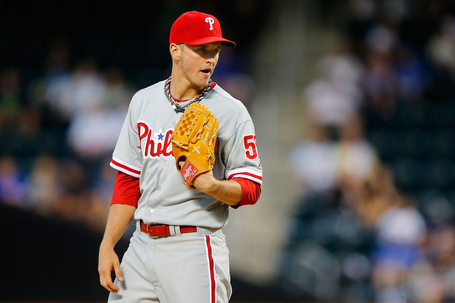 Looking towards the future, the system is not completely empty but is hardly in the elite category either and needs an infusion of talent. 2014 first round pick Aaron Nola was excellent in his pro debut and the former LSU ace could/should reach the major leagues in 2015. Second round pick Matt Imhof is a tall college lefty who could also advance quickly. A pair of prospects acquired from the Dodgers in the Roberto Hernandez trade, infielder Jesmuel Valentin and right-hander Victor Arano, are also promising and boost system depth.

Among holdover prospects, 2013 first-rounder Crawford had a fine campaign and his stock, if anything, is rising. Franco and Biddle had spotty results, the latter at least in part due to injury, but both will still rank highly on the Phillies ’15 list. Outfielder Cameron Perkins was excellent in Double-A and ineffective in Triple-A. 20-year-old Aruban outfielder Jiandido Tromp slugged 14 homers with 16 steals in the New York-Penn League but has some work to do with contact.

Phillies ranked 19th on pre-season list and their status entering 2015 has slipped a few notches.