It was a difficult year in Boston, with Red Sox rookies like Xander Bogaerts and Jackie Bradley failing to reach expectations. On the other hand, Mookie Betts was excellent, and the farm system still has considerable depth in talent.

This morning we look at the Boston Red Sox farm system. Remember, this is the PRE-SEASON list. This is not a new list. These are pre-season rankings and grades. This is a general review of 2014, not a detailed preview of 2015.

3) Garin Cecchini, 3B, Grade B+: Age 23, hit .263/.341/.371 with seven homers, 44 walks, 99 strikeouts in 407 at-bats for Pawtucket, 3-for-9 in the majors so far. I have been strongly pro-Cecchini but this season gives a large magazine of ammunition to the skeptics who worried that his lack of long-distance power would handicap him at the highest levels.

A very disappointing year in Boston of course, with the big league club 20 games under .500. Heralded rookies Xander Bogaerts and Jackie Bradley were disappointments, and mound youngsters like Brandon Workman, Allen Webster, and Anthony Ranaudo all had growing pains. On the other hand, Brock Holt provided an unanticipated bright spot among the younger players, and Mookie Betts proved that his 2013 breakout season was no fluke, thriving in the majors and taking some of the sting out of the abject failure of Bradley. Nobody is giving up on Bogaerts and there are many positives down on the farm.

The system still has a good balance of talent. Position players like catcher Blake Swihart, 19-year-old outfielder Manuel Margot (.293/.356/.462 in A-ball), and third baseman Rafael Devers (age 17, .322/.404/.506 in the GCL) all offer massive upside and are developing well. The 2014 draft added another high upside bat in third baseman Michael Chavis. Sean Coyle has been around forever on lists but is still just 22 and hit .295/.371/.512 in Double-A. Cuban defector Rusney Castillo just turned 27 and the Red Sox are fully committed with a long-term contract. 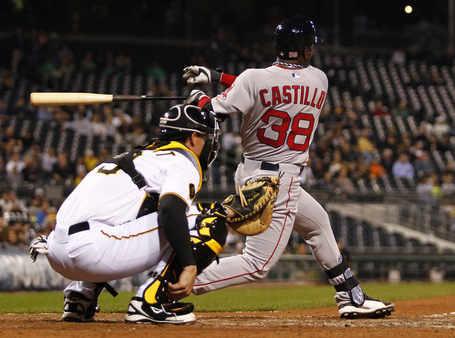 Pitching is a strength. The large group of young right-handers with good arms at the top of the system provides many options but there are three lefties of great note, too: Owens, Johnson, and Eduardo Rodriguez, who looked outstanding after being acquired in a trade with the Orioles. All three should be ready for trials next year; so should lefty Edwin Escobar and right-hander Heath Hembree, acquired from the Giants. Trey Ball provides long-term upside and there are many live arms at the lower levels beyond the obvious group. 2014 international signees Anderson Espinosa and Christopher Acosta stand out in particular, as does third rounder Jake Cosart.

The Red Sox ranked second pre-season on my organization ranking list. They've slipped a few notches, but still rate as one of the stronger systems and should recharge quickly.