Share All sharing options for: Omaha Storm Chasers announce Players of the Year

The Omaha Storm Chasers announced its year-end area media awards before its final regular season game on Monday. Carlos Peguero was named Hitter of the Year, Aaron Brooks was named Pitcher of the Year and Whit Merrifield was named Prospect of the Year.

The left-handed hitting outfielder went on a tear in August, hitting .311/.400/.806 with 15 home runs in 30 games. He was called up to Kansas City before Omaha's game on Monday. It'll be the 27-year-old's first taste of the big leagues since playing a couple of games for the Mariners in 2013. 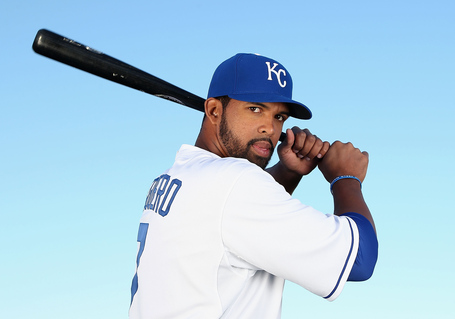 The righty probably didn't have as good a season as his numbers might indicate. He only had nine quality starts in 23 starts for Omaha, and he received a ton of run support (6.2 per game) - highest among all starters on the team, with the exception of Chris Dwyer, who only started four games. The team did go 18-5 when the 24-year-old started.

Merrifield, 25, would have led the PCL in hitting if he would have had enough at-bats to qualify (he played 44 games in Double-A before being transferred to Omaha), but he fell approximately 40 at-bats short. Merrifield led the Storm Chasers in hits in July with 40.